And the most up-to-date hospital admission figures show the number of infected coronavirus patients needing NHS care plunged to 179 on April 13, compared to 222 the previous week. Daily admissions were above 4,000 at the peak in January.

Another 119,306 first doses were also dished out yesterday, taking the UK’s total number of vaccinated adults to 32.6million. Some 485,421 were also given second dose, with the number fully vaccinated now at 9.4million.

It comes as a leading immunology expert claimed the Indian Covid variant is unlikely to set lockdown easing back to ‘square one’ because immunity from vaccines ‘won’t just disappear’.

Member of the Joint Committee on Vaccination and Immunisation (JCVI) Professor Adam Finn said he expected a ‘gradual erosion’ of vaccine protection as the virus evolves.

But he said it was but not enough to ‘scupper’ the Prime Minister’s road map, as one leading scientist had predicted.

Boris Johnson plans to remove all legal limits on social contact by June 21 – after non-essential retail shops and outdoor pubs and bars reopened this week. 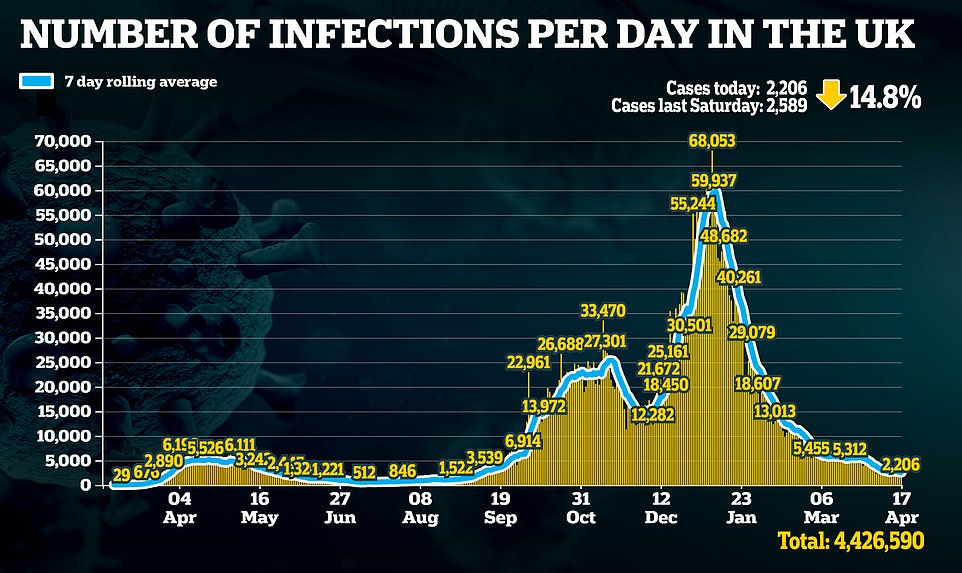 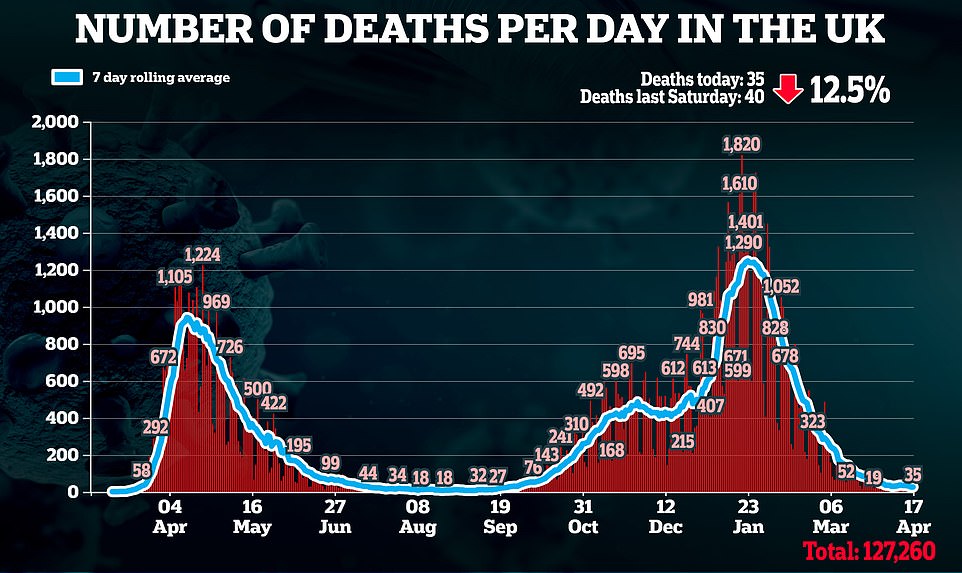 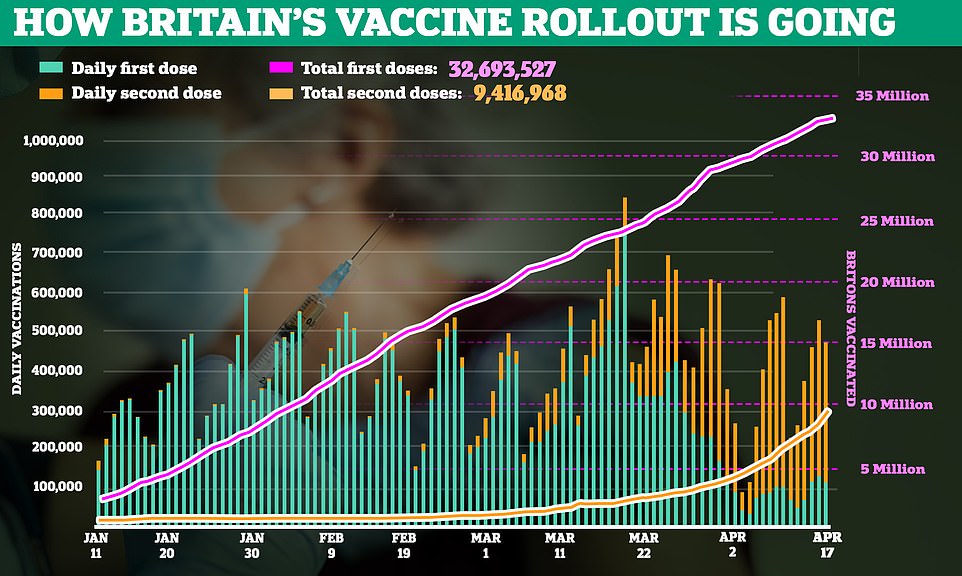 On Friday, Imperial College’s Danny Altmann said ‘we should be terribly concerned’ after 77 cases of a potentially vaccine-busting Covid-19 mutation first discovered in India were identified in Britain. 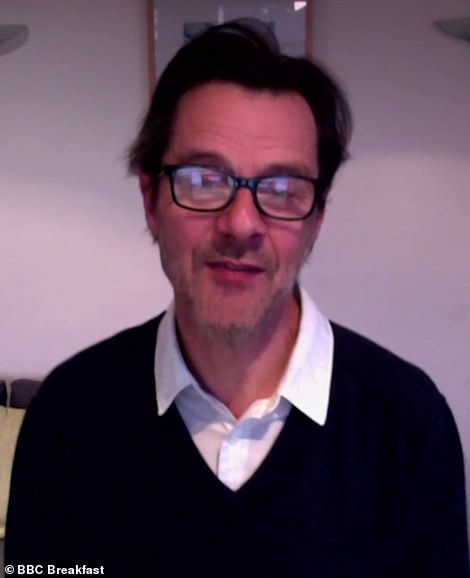 Member of the Joint Committee on Vaccination and Immunisation (JCVI) Professor Adam Finn said he expected a ‘gradual erosion’ of vaccine protection as the virus evolves.

Professor Altmann told the BBC: ‘They (variants of concern) are things that can most scupper our escape plan at the moment and give us a third wave. They are a worry.

But Professor Finn blasted Professor Altmann as ‘a bit pessimistic’ with his assessment.

He told Times Radio: ‘We’ve all expected evolution of this virus to occur from the start.

‘I also think that we know from other viruses and previous experience that the immunity that vaccines give won’t just disappear.

‘It will be a gradual erosion. It won’t be back to square one. I would be really surprised if that happened.

‘So, I think, possibly, that interpretation is a bit pessimistic.’

The Indian variant is thought to be the cause of a huge second wave of infections across the south-Asian nation.

But the Government has so far left India off the mandatory hotel quarantine list – unlike neighbouring countries Bangladesh and Pakistan. 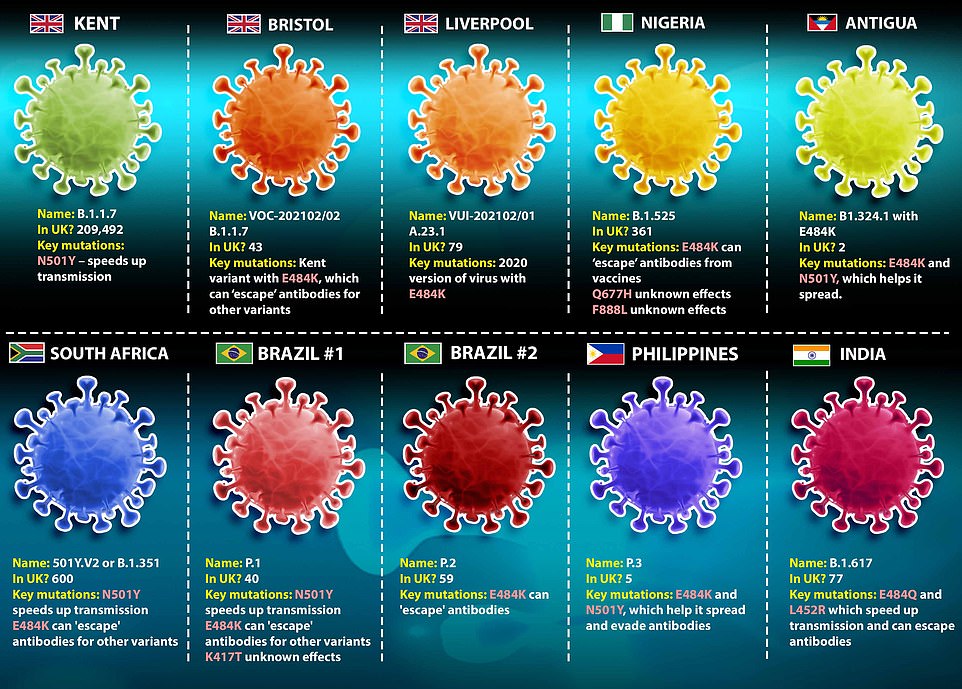 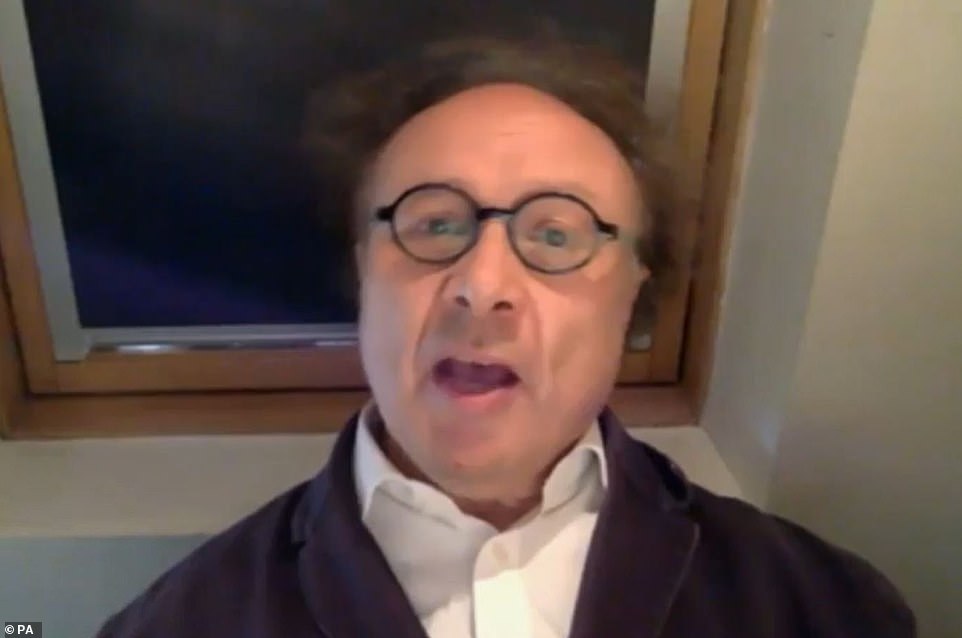 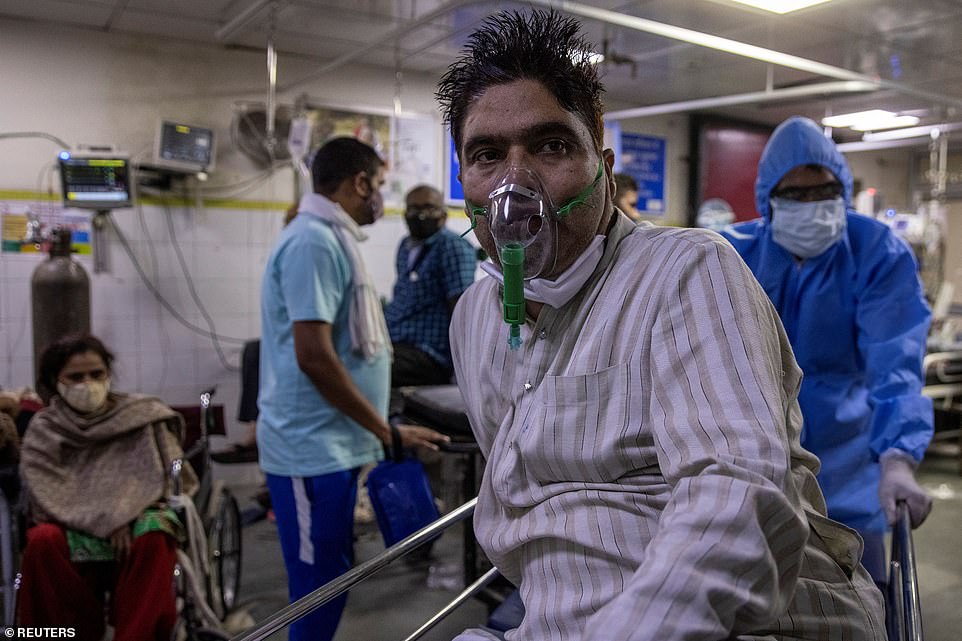 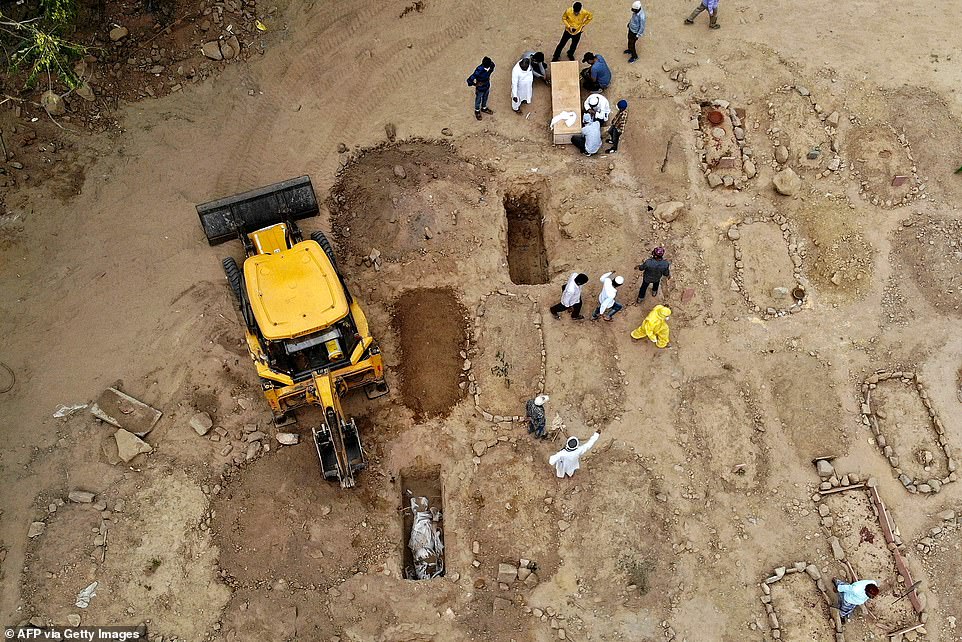 In this aerial picture taken on April 16, relatives and friends gather to bury the dead bodies of Covid-19 coronavirus victims at a graveyard in New Delhi

That’s despite experts believing that the Indian variant not only speeds up transmission, but also features an ‘escape mutation’ which could possibly impact on the effectiveness of vaccines.

It was earlier revealed that 77 cases of the variant had been discovered in the UK.

WHAT DO WE KNOW ABOUT THE INDIA VARIANT?

When and where was it discovered? The variant was first reported as being of concern by the Indian government in late March. The first cases appear to date back to October 2020.

What mutations does it have? The two main mutations are named E484Q and L452R, which scientists suspect can help it to transmit faster and to get past immune cells made in response to older variants. Those mutations are routinely not found on other variants monitored by Public Health England.

How many people in the UK have been infected with it? 77 people so far, according to a report published on April 15. Their locations are unknown.

Public Health England said the strain – known as B.1.617 – was under investigation ‘due to sustained international transmission’.

These essentially make its easier for the virus to slip past antibodies – which a person can get through vaccinations or previous infection.

Professor Hunter told ITV: ‘There’s laboratory evidence that both of these are escape mutations.

‘Basically, applying what we know about other human coronaviruses would suggest that this is going to be even less controlled by vaccine.

‘But we don’t know that for certain at the moment.’

Despite the concern, India is not currently on the Government’s ‘red list’ for travel.

The red list sees people who have been in those countries in the previous 10 days refused entry to the UK.

British or Irish nationals, or people with UK residency rights, are able to return from red list countries but must isolate in a quarantine hotel for 10 days.

Boris Johnson is due to visit India later this month – in his first international since the Brexit deal with the EU was reached.

The UK is hoping to secure a £50billion trade deal with the south-Asian country.

Downing Street has defended leaving India off the hotel quarantine list and said the register is ‘under constant review’.

Neighbouring Bangladesh and Pakistan, however, are included on the list despite their outbreaks being only a third of the size.

So far, seventy-three of the 77 cases have been in England and four in Scotland.

The first of them date back to February, The Guardian reports, although no announcement was made until yesterday.

Public Health England generally only makes the announcement when it becomes clear that the variant could be dangerous. 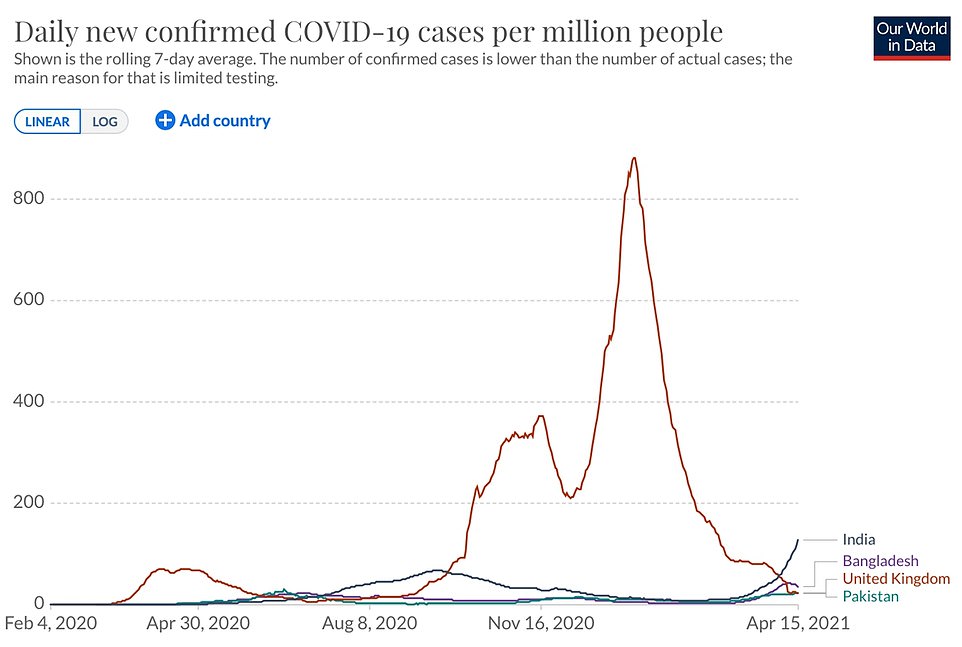 India’s not on the UK’s red list but Pakistan and Bangladesh are, despite currently having smaller outbreaks

Variations of the virus crop up all the time and when cases first appear it is difficult to tell if they are significant or not, or whether there is any trend.

A similar delay happened before testing started to pick up the South Africa variant. PHE officials knew that variant was spreading in Britain in December but didn’t start testing communities to weed it out until February.

The Indian variant was first spotted by scientists in March when it was described by the government in New Delhi as a ‘double mutant’.

They suggested that the variant had formed as a hybrid of two other strains and that it showed signs of being more infectious and less easily targeted by the immune system.

Two key mutations set it apart from others – named E484Q and L452R – with both of them found on the ‘spike’ that the virus uses to latch onto human cells.

These are not thought to be key mutations of any of the other variants on Public Health England’s list, but have appeared in virus samples before. 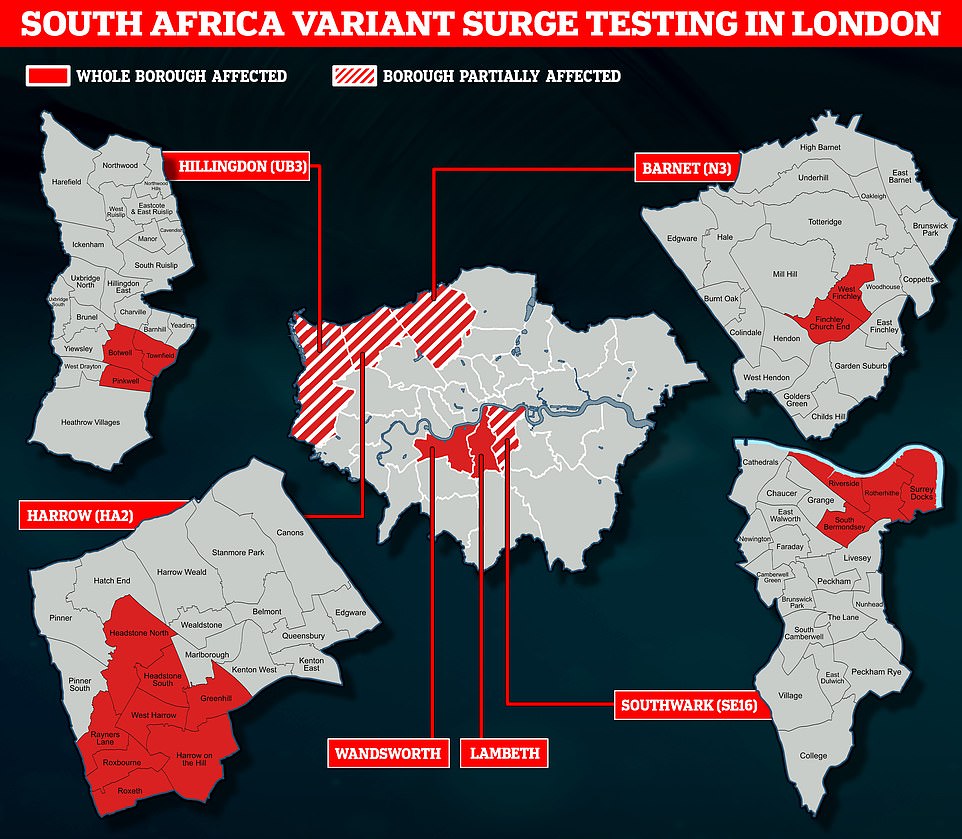 Surge testing is being done in London to weed out cases of the South Africa variant, which experts describe as ‘the most worrying’ strain

Dr Simon Clarke, a microbiologist at Reading University, said at the time: ‘As for the L452R mutation, we’re still waiting for a proper definition of what it does.’

The arrival of the India variant in the UK, and the fact that the country is seeing a massive resurgence in Covid-19 cases, do not seem to have set off alarm bells in the Foreign Office.

India is still not on the red list, which means travellers would have to go into hotel quarantine in case they have coronavirus, despite its close neighbours being on the list even though they have smaller outbreaks.

A No 10 spokesman said today: ‘We add and remove countries based on the latest scientific data and public health advice from a range of world-leading experts.

‘We keep it under constant review and we won’t hesitate to introduce tougher restrictions and add countries if we think it is necessary.’

India is going through a rough second wave of the virus, with higher infection rates than during the first explosion in cases last summer.

Boris Johnson will visit India on April 26 and his team insist ‘all elements of the trip will be Covid-secure’.

It comes as Britain’s daily Covid cases fell again yesterday as officials recorded just 2,596 positive tests — down 20 per cent in a week.

And the most up-to-date hospital admission figures show the number of infected coronavirus patients needing NHS care plunged to 204 on April 12, compared to 235 the previous week.

Daily admissions were above 4,000 at the peak in January.

Another 129,782 first doses were also dished out on Thursday, taking the UK’s total number of vaccinated adults to 32.5million.

Some 417,683 were also given second dose, with the number fully vaccinated now at 8.9million.

It comes as official estimates yesterday suggested England’s coronavirus R rate could now be as low as 0.7 and infections are continuing to fall.

No10’s scientific advisers predict the reproduction rate — the average number of people infected patients pass the virus on to — is no higher than 1.0. Last week SAGE said the figure was likely between 0.8 and 1.0.

Office for National Statistics surveillance data also suggested only one in 500 people in England had the virus at any point in the week ending April 10, a 34 per cent drop from the previous week.

For comparison, the rate during the darkest days of the nation’s second wave in January was around one in 50 – or 2 per cent of the population.

Pubs and restaurants had not reopened for outdoor service for the time period covered by the ONS data, although schools had been welcoming back pupils for more than a month.