A British man who got married in Kabul a week before it fell to the Taliban has described the experience as a ‘rollercoaster of emotions’.

Abdul and Fatima, whose names have been changed, had their wedding at the start of the month and within days the Taliban had arrived outside the capital, which fell into their control on Sunday August 15.

Since then the couple have been threatened with death by Taliban soldiers, fled the country and are now spending their ‘honeymoon’ in quarantine in a hotel in London.

The 25-year-old medical student, who was born in Afghanistan, told the PA news agency: ‘I got married in the first week of August, on the second week, I heard the Taliban were on the outskirts of Kabul. 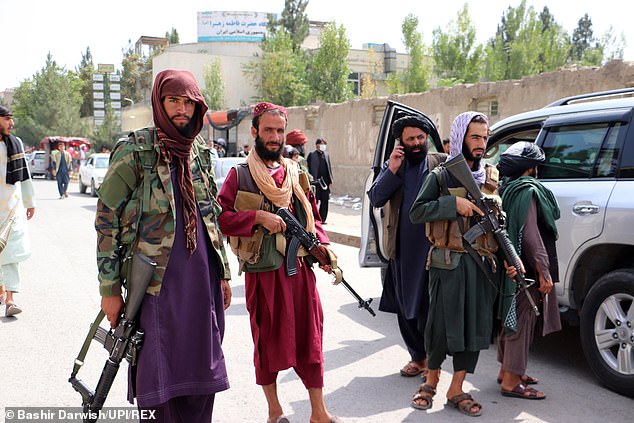 A British-Afghan couple who wed in Kabul at the start of the month were forced to flee after insurgent Taliban forces took over the country within days. Pictured: Taliban fighters patrol the streets of the capital

‘You’re happy you’ve just had your wedding, invited hundreds of people, then suddenly you hear the news.

‘I’ve never been in such a situation before where you’re very happy and then it hits the ground, and then it’s hard to come back up.’

Abdul grew up in the outskirts of Kabul before relocating to London as a teenager, and returned to his birthplace in early July after finishing his second-year exams at a UK medical school.

He and his wife arrived into Birmingham airport on Monday night after an evacuation flight from Kabul, and are now quarantining in a hotel in Westminster.

‘I told my wife, this is our honeymoon… so take advantage of it,’ Abdul joked.

‘Hopefully in the future we will try to have one, but for now this is our honeymoon – being safe, knowing the future will be bright and hopefully we can settle somewhere in the UK.’ 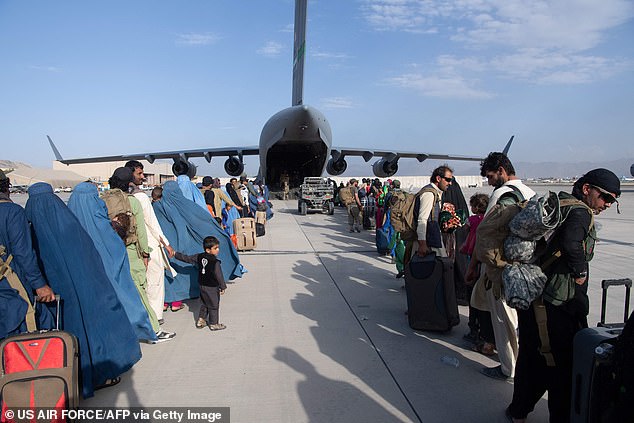 The couple have been threatened with death by Taliban soldiers, forcing them to flee to the UK on an evacuation flight. The couple are now spending their ‘honeymoon’ in quarantine in a hotel in London, having arrived safely on Monday night. Pictured: Passengers evacuating at Hamid Karzai International Airport

Abdul said traditionally he would have been invited to various members of his wife’s extended family in the weeks after the wedding, but they did not even get the opportunity to say goodbye to her parents before they had to flee.

They are now concerned for the safety of those left behind.

‘Right now, if I don’t listen to the news I can gain peace of mind just for a while,’ he said.

‘But my wife, because she has family members in Afghanistan, she keeps watching TV.

‘I think with people who are in Afghanistan at the moment, they have no hope… they are expected to be beaten up by the Taliban.’

Abdul said a Taliban member threatened to kill him in front of his wife last week after he showed his British passport at a checkpoint in Kabul.

He was trying to reach British soldiers beyond the position, which the Taliban member allowed, but only by pulling and leading him by the arm for ‘100 yards or so’, leaving him bruised. 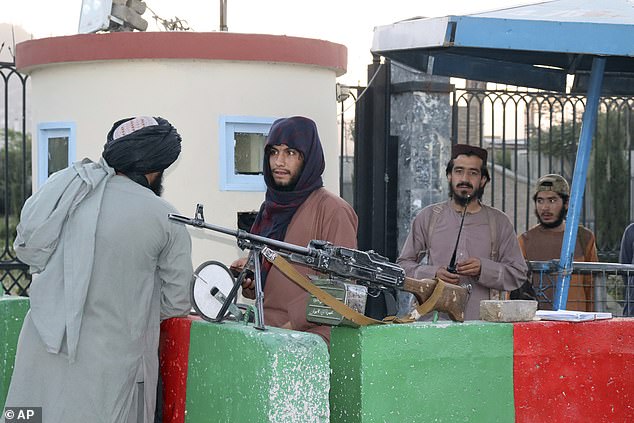 Abdul said a Taliban member threatened to kill him in front of his wife last week after he showed his British passport at a checkpoint in Kabul. Pictured: Taliban fighters stand guard at a checkpoint

‘They told me “if there wasn’t international pressure on us, we would have shot you dead”,’ Abdul said.

Abdul said his wife has faced anxiety since their journey, and he fears the NHS could face a mental health crisis helping refugees with PTSD when they return to the UK.

‘I think over the past few days we have managed to give ourselves hope, you’re in safety, I’ll be able to go back to medical school in mid-September to pursue my dreams,’ he said.

‘I hope my wife can kind of start getting back a peace of mind as well.’

He added that he does not know where he and his wife will live after they finish quarantine but he hopes the UK Government has plans to help refugees with accommodation.

‘But… for now, I’m happy that we’re in a safe place and grateful to everyone who contributed to the evacuation of myself, my wife and all (others).’

*The couple’s real names have been replaced with Abdul and Fatima to protect their identity.