The Home Office risked fury today after it said travellers ‘need to accept’ they could face lengthy delays at airport border control during peak travel times.

The Government was facing questions over why there were seemingly so few Border Force guards dealing with thousands of Heathrow passengers yesterday after yet more shocking scenes of huge queues at the airport.

Exhausted families with young children and elderly people could be seen sitting on the floor in the queues, which snaked as far back as the gates in Terminal 2, while Terminal 5 was also badly hit.

Parents complained about being corralled to the limited number of counters operated by Border Force staff because facial recognition technology on e-gates does not work with babies and toddlers.

Disgruntled passengers took to social media to share their frustration, with one claiming ‘only 5-6 counters out of 32 were operational’.

But the Home Office said its ‘utmost priority is protecting the safety and health of the public’.

A spokeswoman said: ‘That means, occasionally, passengers will need to accept an increase in the time taken to cross the border, especially during peak travel periods.

‘We will never compromise on border security and continue to fulfil our vital function of keeping the border secure while checking that passengers are compliant with the current health measures.

‘Border Force officers are redeployed to provide support as and when required, and are playing a vital role by working round the clock to support arrivals from Afghanistan.’ 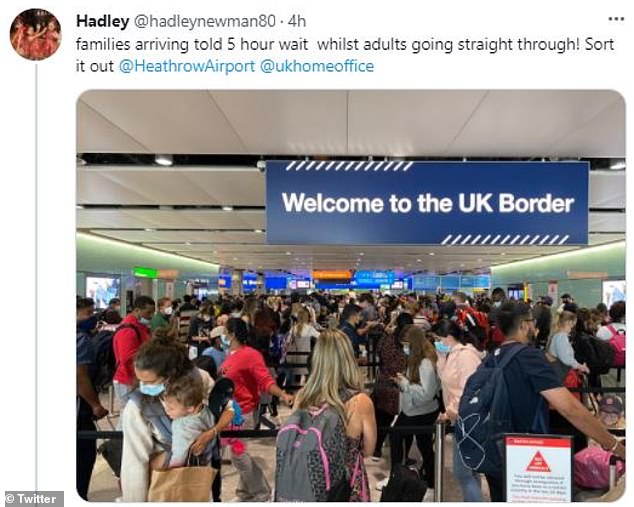 Heathrow’s summer of queuing chaos: So when WILL the government get a grip?

May 17 – Passengers flying into the UK faced ‘bedlam’ at the border with some facing a three hour wait at the Heathrow passport gates. Travellers told MailOnline how they were ‘terrified of catching Covid’ while being crammed into the airport’s border hall this morning.

July 20 – 90-minute queues were seen at arrivals after the government failed to update Passenger Locator Forms ahead of its ‘Freedom Day’ rule changes – resulting in double-jabbed Britons being rejected at e-gates.

August 2 – Queues of passengers stretched the entire length of Terminal 5. Officials again blamed staff having to self-isolate. A spokesman quoted figures showing that one in four Border Force guards were reported to be off sick with Covid or self-isolating.

August 29 – Three-hour waits were reported at passport control. A day later the Home Office risked fury as it said passengers ‘need to accept’ the risk of delays at peak times.

Entrepreneur James Reed had tweeted: ‘Perverse arrangements at Heathrow T5 arrivals this weekend; adults are checked digitally, but families with small children (under 12) have to queue for hours. Huge Q last night at 11 pm with many very tired small children. Surely there’s a better way.’

And Camilla Kerr added: ‘Yesterday I arrived at London Heathrow to chaotic queues. Families with kids can’t go through the e-passport checks so we had to queue for the border guards. Problem is there was only two employed to deal with hundreds of families. Why wouldn’t you employ extra guards?’

In at least one case, passengers were held on board a plane after it landed because delays in the terminal building had become so bad.

People waiting complained they had been offered no water and questioned why officials appeared to be manning only two or three border checkpoints.

Meidad Suchowolsky said he arrived with his wife on a flight from Tel Aviv at 12.45pm.

But five hours later, the couple were still waiting in line with other exasperated travellers.

Mr Suchowolsky, 61, said: ‘It’s unbelievable. There are parents here with babies and young children and people from many different countries – and we have no idea who is vaccinated and who isn’t.

‘There only seem to be two people on the checkpoints and we haven’t been told anything.’

Another man waiting in line said he arrived with his family at 12.15 but they were still waiting well over five hours later.

The father-of-two, who didn’t want to give his name, said: ‘Everyone is very frustrated. You’ve had children crying and people sitting on the floor for hours.

‘No one has offered us any water, or an explanation. It’s disgraceful.

‘Some people here must also have come from countries on the red list yet we are all packed in here together.’

He estimated there were ‘thousands’ of people still waiting to be seen at 5.30pm.

Other passengers expressed frustration via Twitter and claimed that more checkpoints were open for EU arrivals than non-EU arrivals despite bigger queues for the latter.

‘Have been waiting over 5 HOURS. No water, no bathroom,’ one person tweeted. ‘This is a disgrace.’

Another woman tweeted to say that she and other passengers had being stopped from disembarking from their plane because of the holdups.

‘No water being offered, one lady on the plane very unwell,’ she tweeted. 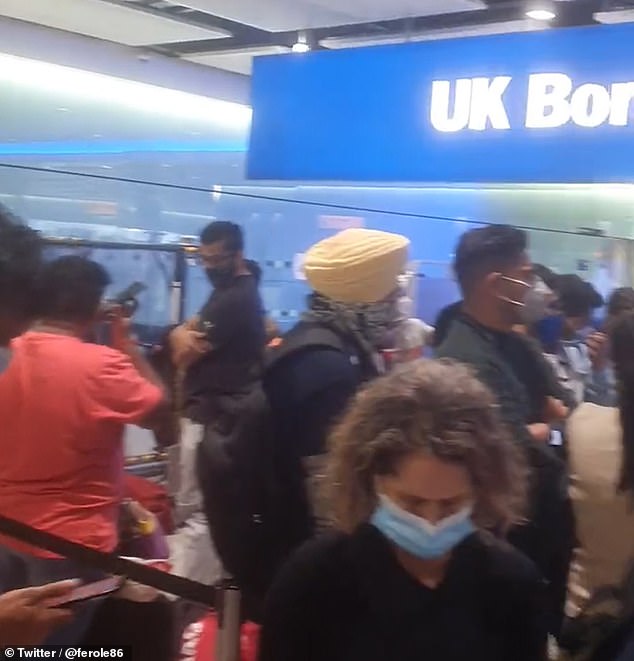 And another said: ‘Our flight arrived at 13:45, together with other 2 flights. 4 hours in the line, without COVID measures or special attention for women and kids.’

Last month, Border Force officers were reportedly told they no longer needed to make Covid checks on all arrivals in a bid to reduce airport queues.

According to a leaked report officials were told they no longer have to ‘routinely’ check passengers arriving from green and amber list countries.

Arrivals currently have to provide a negative Covid test taken before departure and must complete a Passenger Locator Form within 48 hours of departure to the UK.

But, as of last month, Border Force officials no longer routinely check passengers have these documents, according to the leaked document, first reported by the Guardian.

Passport e-gates also no longer refer passengers to in-person checks by Border Force officers if a passenger locator form is not found, the paper reports.

Passenger Locator Forms are still checked by airlines ahead of travel, while the Government insists arrivals who do not comply still run the risk of being fined.

The change in policy also does not impact on red list arrivals, who must isolate in designated quarantine hotels for 10 days, at the cost of £1750, after landing in the UK.

The recent scenes are just the latest example of hours-long delays at Heathrow in recent weeks.

At one stage earlier this month, more than a quarter of Heathrow’s Border Force staff were reportedly off sick with the coronavirus.

A Heathrow spokesman declined to comment when contacted by the Mail last night.

However, on Twitter, the firm told users who complained that ‘unfortunately immigration desks/E-gates can only be operated by UK GOV officials and not airport staff’.

‘Waiting times at the border have on occasion been unacceptable and we have called on the UK Government to address the problem as a matter of urgency,’ the airport added.

What do arrivals from green and amber list countries need to do before they travel?

– You must take a Covid test before you travel. This can be a PCR, Lamp or anti-gen but must meet specific requirements – of ≥97% specificity, ≥80% sensitivity at viral loads above 100,000 copies/ml.

– You must book and pay for a ‘Day 2’ Covid test to be taken two days after your arrival in the UK.

All of the above. PLUS:

– If you are NOT double vaccinated you must quarantine at home for at least 10 days. You can be released earlier if you take part in the Test and Release scheme.

– If you ARE double vaccinated you will need to declare that you have been fully UK vaccinated on your passenger locator form or you are under 18 and resident in the UK. You will need to show proof of your vaccination status to your carrier (ferry, airline or train) when you travel.