Dozens of dogs have been abandoned by the US in Afghanistan, along with up to 200 civilians and military equipment, according to an animal welfare charity.

American Humane condemned the ‘death sentence’ for the animals allegedly left behind who now face ‘torture’ at the hands of the Taliban, who took control of the city earlier this month.

The group has called on Congress to rescue the dogs, who according to the Pentagon’s Press Secretary John Kirby, belong to the Kabul Small Animal Rescue charity, founded by American Charlotte Maxwell-Jones.

‘To correct erroneous reports, the U.S. Military did not leave any dogs in cages at Hamid Karzai International Airport, including the reported military working dogs,’ Kirby tweeted on Tuesday. ‘Photos circulating online were animals under the care of the Kabul Small Animal Rescue, not dogs under our care.’

According to a recent update from the Society for the Prevention of Cruelty to Animals, Maxwell-Jones has been campaigning to get 46 working dogs, along with a number of dogs that were pets of fleeing Americans, evacuated from Kabul.

However, according to the statement released by Kirby, the military was unable to evacuate the animals from Kabul before the final plane left the airport on Monday. While working dogs are not considered U.S. military dogs, some were still used by the military in activities in Afghanistan. 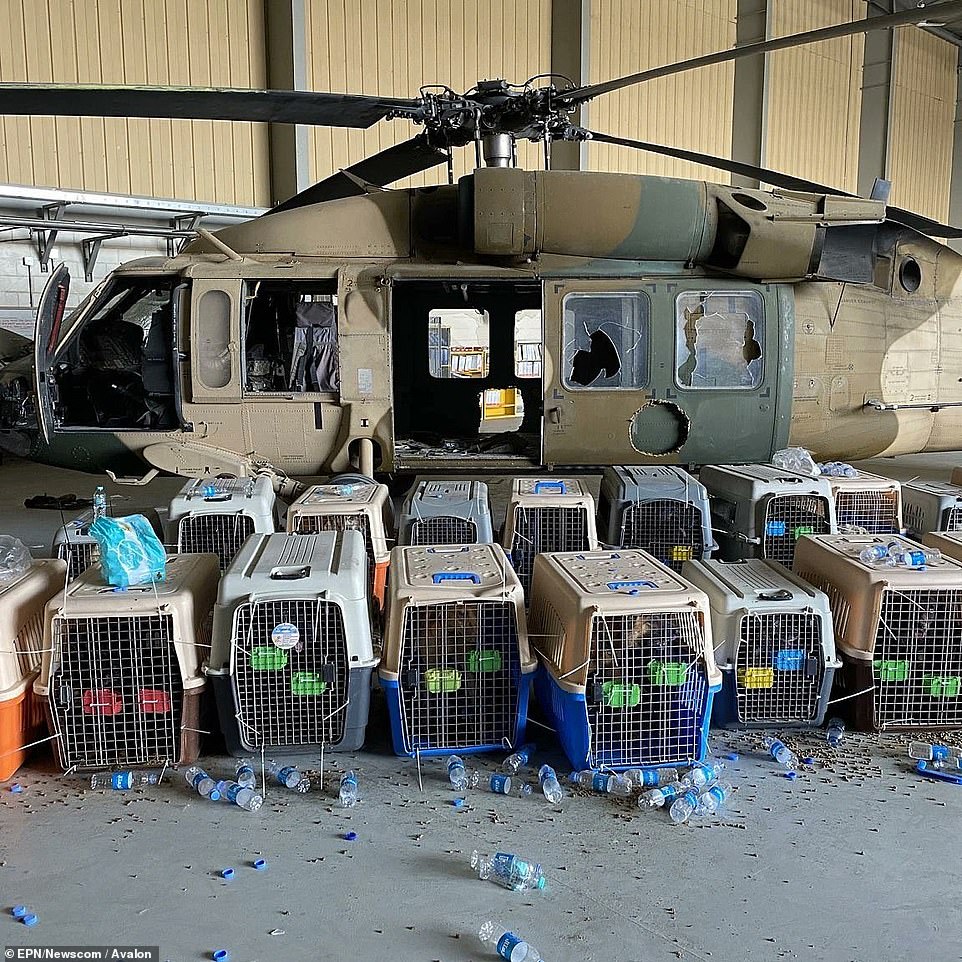 Dozens of working dogs were abandoned by the US in Afghanistan after the troop withdrawal. According to Pentago Press Secretary John Kirby, these dogs were in the care of the Kabul Small Animal Rescue charity, whose founder had petitioned the military to evacuate the animals from the country

Pentagon press secretary said on Tuesday that the dogs pictures at the airport belonged to the Kabul Small Animal Rescue charity, founded by American Charlotte Maxwell-Jones, who has been petitioning to get the dogs out of the country 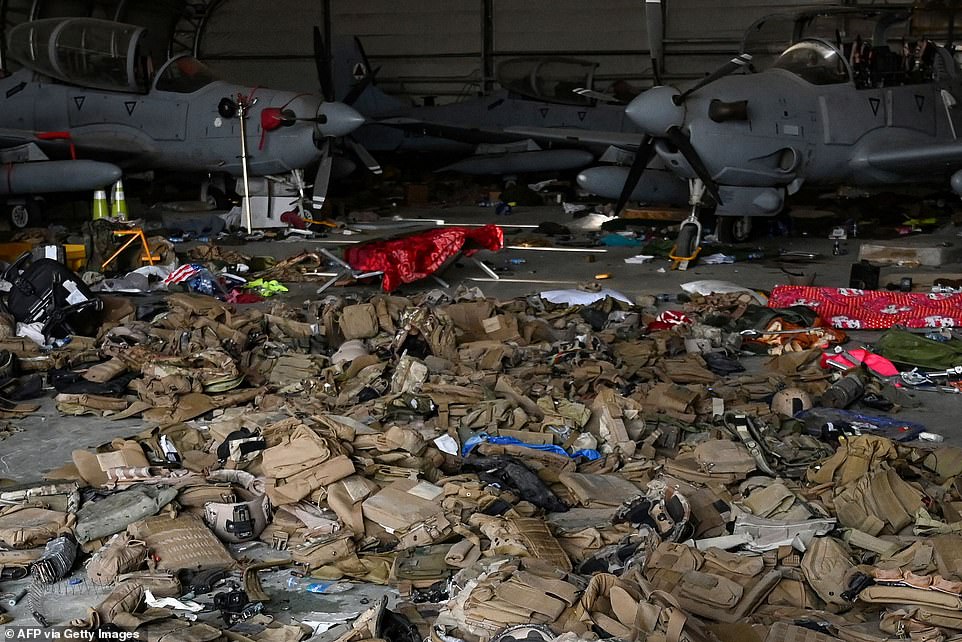 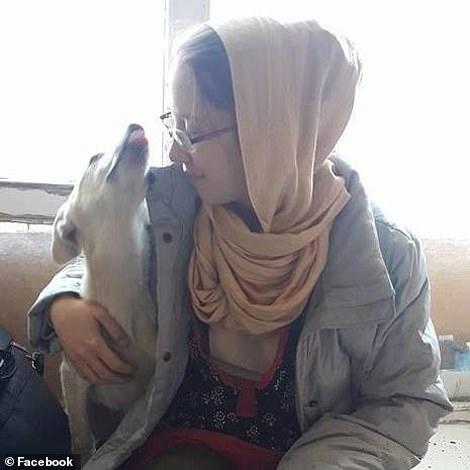 Kabul Small Animal Rescue charity, founded by American Charlotte Maxwell-Jones (pictured) , has been campaigning to get 46 working dogs, along with a number of dogs that were pets of fleeing Americans, evacuated from Kabul

American Humane’s CEO Robin R. Ganzert said in a statement: ‘I am devastated by reports that the American government is pulling out of Kabul and leaving behind brave US military contract working dogs to be tortured and killed at the hand of our enemies.

‘These brave dogs do the same dangerous, lifesaving work as our military working dogs, and deserved a far better fate than the one to which they have been condemned.

‘This senseless fate is made all the more tragic, as American Humane stands ready to not only help transport these contract K-9 soldiers to US soil but also to provide for their lifetime medical care.’

Ganzert added that her organization ‘has worked hand in hand with the military for more than 100 years to rescue military animals,’ adding that the group ‘brings home retired military working dogs and pairs veterans with life-saving service dogs.’

American Humane has worked with the military for more than a century to rescue stranded military animals, having previously worked in World War One.

Working dogs are normally owned by private contractors to work alongside military dogs who are owned by the Department of Defense, often performing similar duties.

Ganzert added: ‘As the country’s first national humane organization and largest certifier of animal welfare in the world, it sickens us to sit idly by and watch these brave dogs who valiantly served our country be put to death or worse.

‘In order to prevent this tragedy from occurring, these K-9’s should be loaded into whatever cargo space remains and flown to safety. Irrespective of the outcome, this gross oversight of justice must be stopped from happening again, as it did in Vietnam too.

‘To that end, we call on Congress to take action to classify contract working dogs on the same level as military working dogs. Failure to do anything less, is a failure of humanity and a condemnation of us all.’

Sharing photos of dogs in cages stranded in Kabul, one person commented: ‘Not a great day for America’s service dogs that are still in the airport.’

The news that U.S. service dogs were left behind contrasts with the UK’s evacuation efforts, which saw almost 200 rescue dogs and cats saved from Kabul, along with a former Royal Marine Paul ‘Pen’ Farthing, who founded an animal rescue charity while in Afghanistan.

Mr Farthing’s campaign to get his animals to safety became hugely topical in Britain over the past fortnight, with some arguing that the choice to rescue the animals resulted in resources that could have been used to evacuate more people being occupied.

Yesterday, he revealed the Taliban had stabbed one of his dogs to death.

The veteran has said he is still working to help evacuate 68 Nowzad animal shelter staff and family members, including 25 children and one newborn baby, from Afghanistan as part of his Operation Ark campaign. 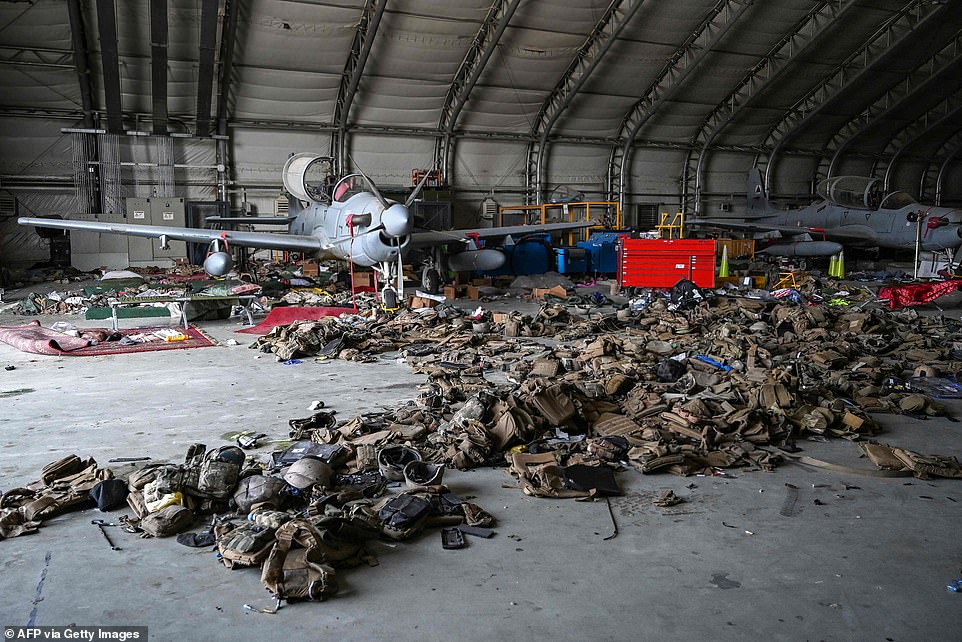 The US has also abandoned as much as 70 Mine Resistant Ambush Protected vehicles, 27 Humvees and 73 aircraft in Afghanistan 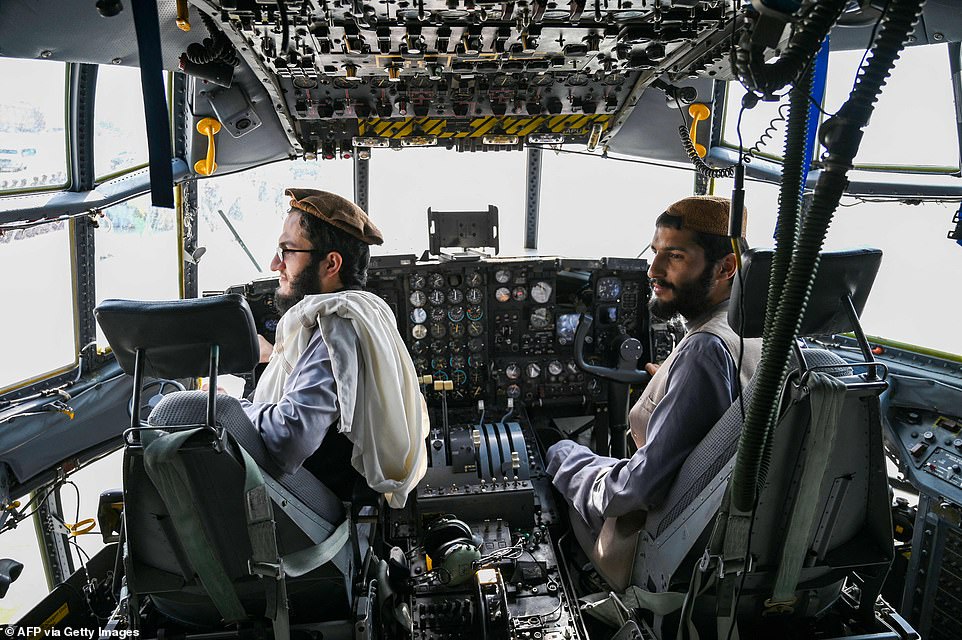 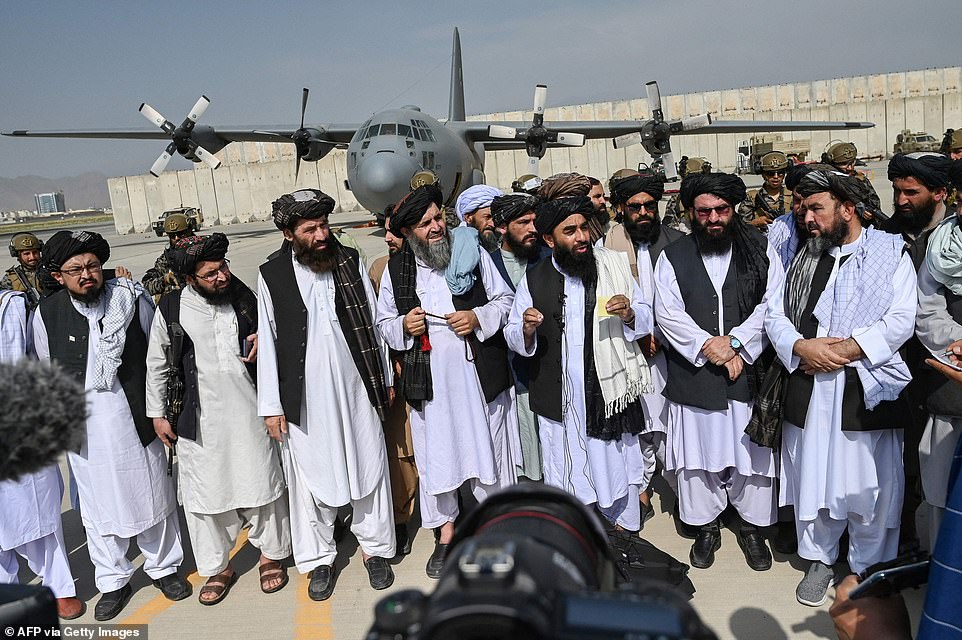 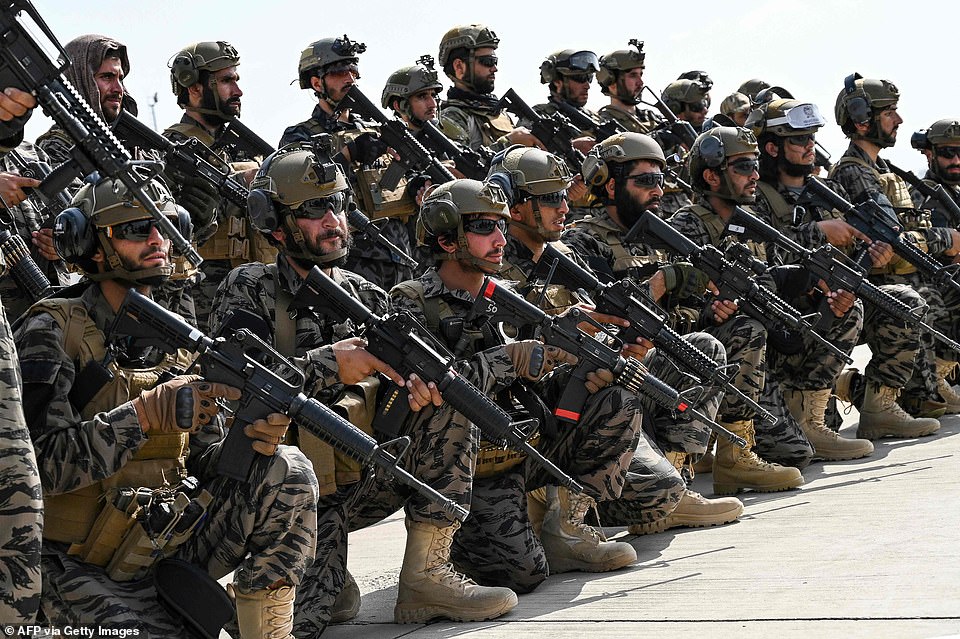 Along with the dogs, there are up to 200 US citizens still in Afghanistan after the US withdrew its final troops, bringing an end to the 20-year campaign.

Critics slammed Biden for breaking his promise to stay until all citizens were airlifted to safety after he pulled out the last forces 24 hours before the August 31 deadline.

The US has also abandoned as much as 70 Mine Resistant Ambush Protected vehicles, 27 Humvees and 73 aircraft in Afghanistan, although much of the equipment has been disabled.

He said the Pentagon, which built up a force of nearly 6,000 troops to occupy and operate Kabul’s airport when the airlift began on August 14, left behind around 70 MRAP armoured tactical vehicles – which can cost up to $1 million a piece – that it disabled before leaving, and 27 Humvees.

Before the last US troops left, they disabled scores of aircraft and armoured vehicles – as well as a high-tech rocket defence system – at the airport, a US general said.

Cockpit windows had been shattered, instrument panels smashed, and aircraft tyres shot out.

The US also left behind but disabled the C-RAM system – counter rocket, artillery, and mortar – that was used to protect the airport from rocket attacks.

The system helped fend off a five-rocket barrage from the jihadist Islamic State group on Monday. 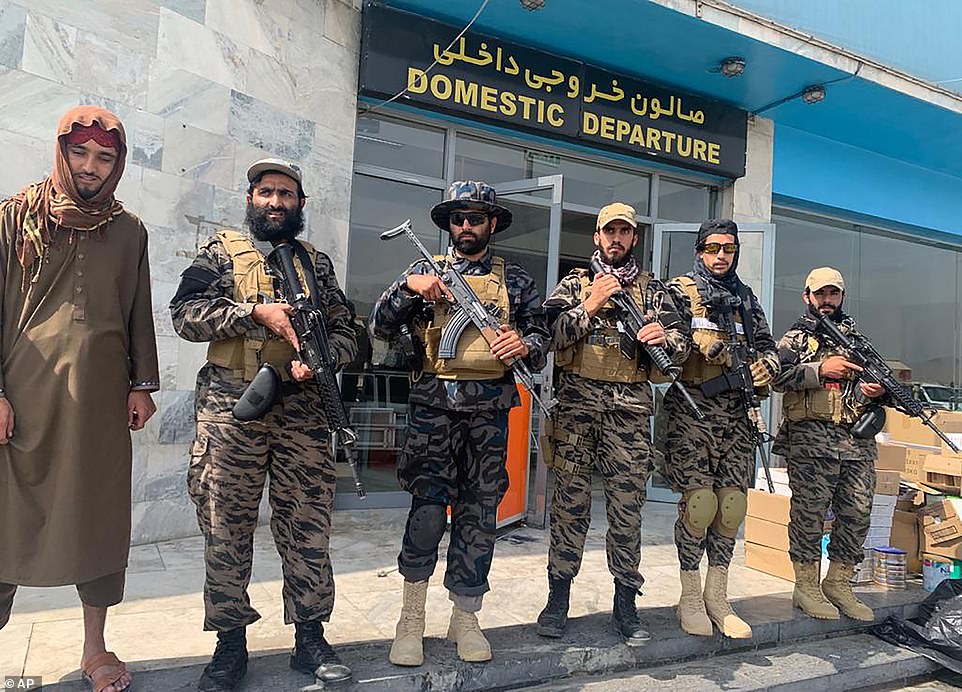 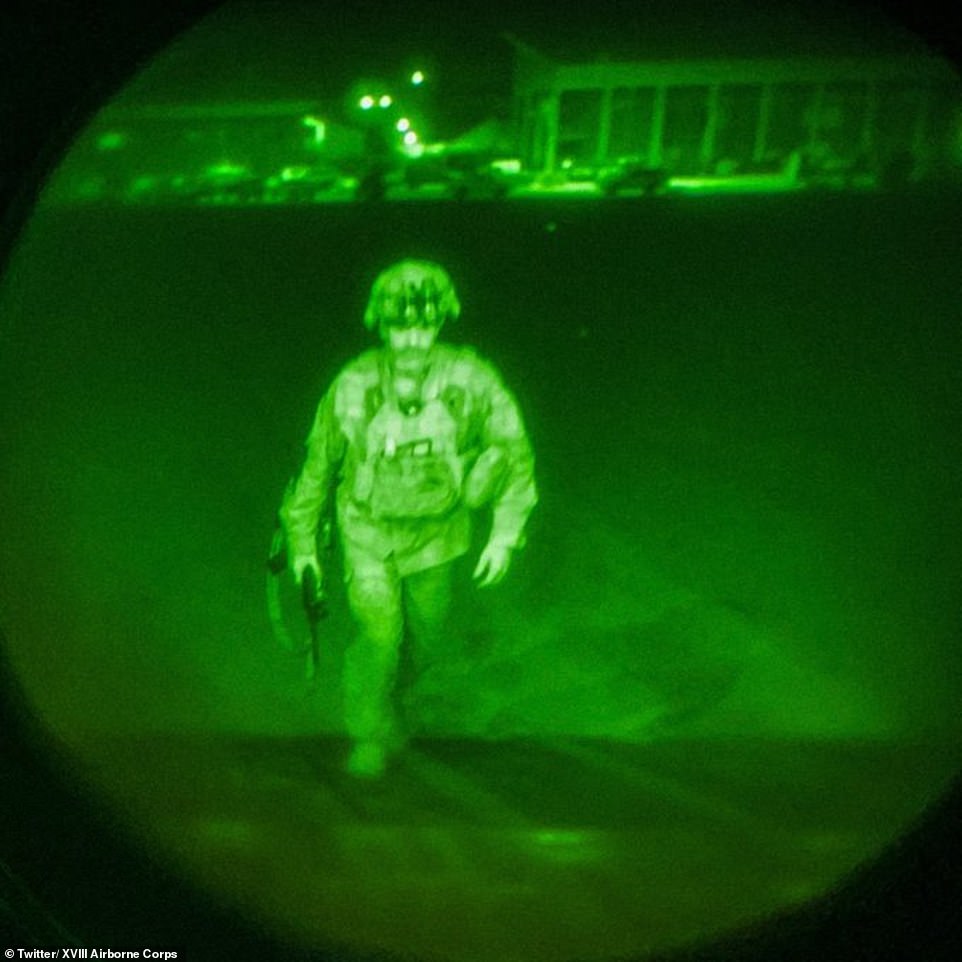 Amid the celebratory scenes in Afghanistan – and surrounded by Taliban special forces units dressed head to toe in American gear – spokesman Zabihullah Mujahid hailed the ‘victory’ over western forces.

‘It is an historical day and an historical moment…. we liberated our country from a great power,’ he added, saying the last 20 years should serve as a ‘big lesson for other invaders [and] a lesson for the world.’

Calling the day a ‘big lesson for other invaders and for our future generation,’ he then told gathered journalists: ‘It is an historical day and an historical moment. We are proud of these moments, that we liberated our country from a great power’.

Hundreds of American and British citizens were left behind when the last US evacuation plane took off late Monday, along with thousands of Afghans who helped western troops on a promise of sanctuary that was ultimately broken. Many now fear for their lives.

Mujahid insisted today that Taliban security forces will be ‘pleasant and nice’ to those left behind, despite reports already emerging of summary executions and persecution against women reminiscent of the Taliban of old. 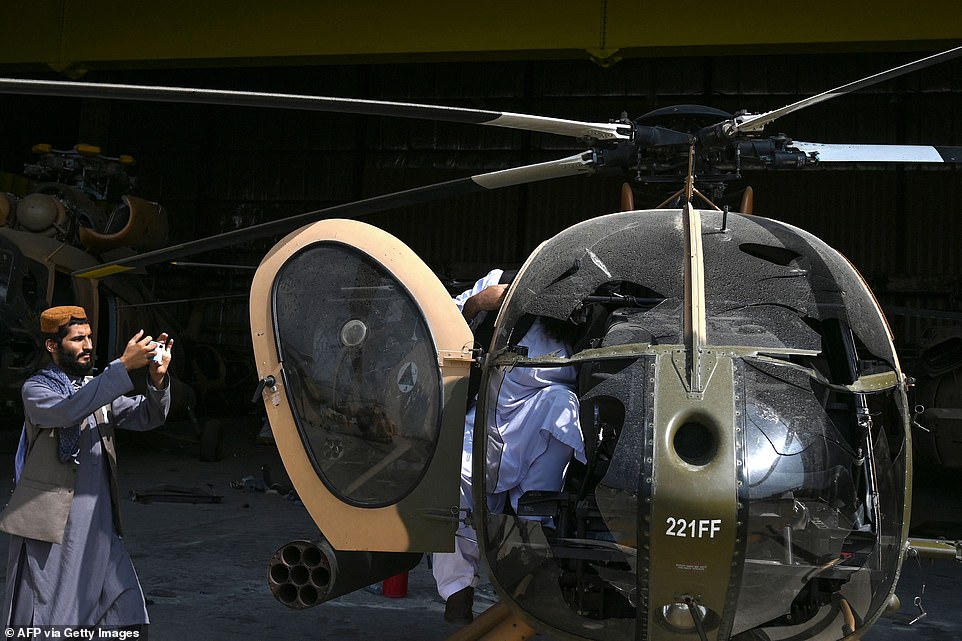 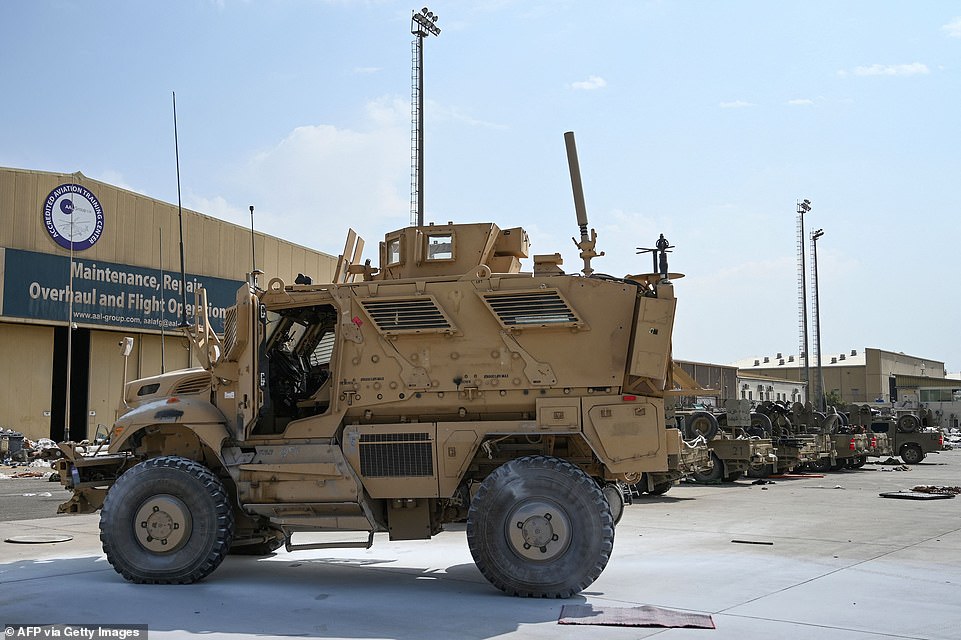 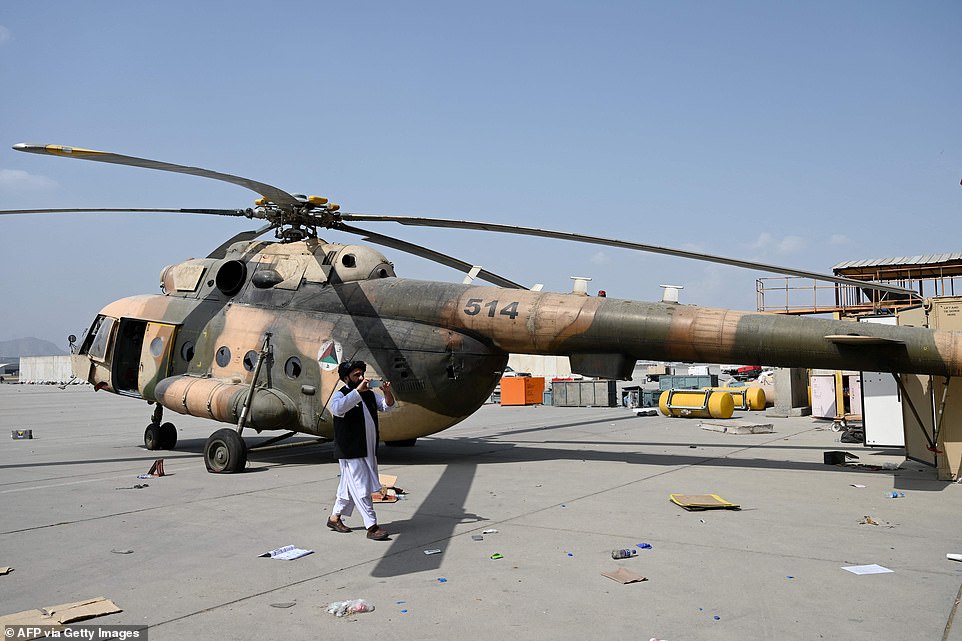 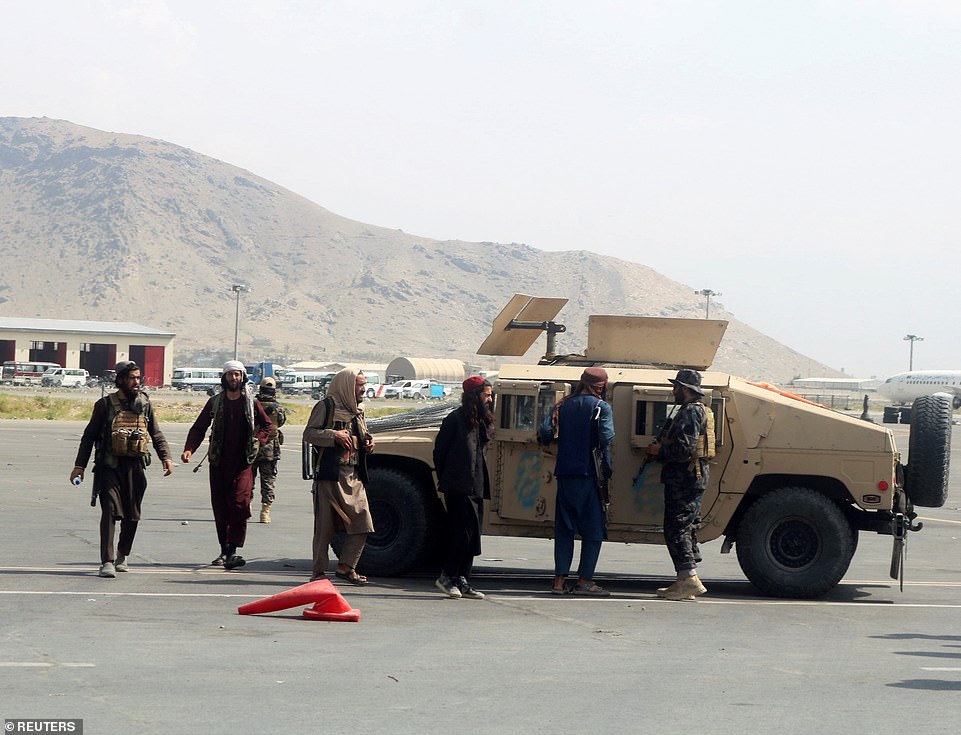 Taliban fighters inspect a US Humvee at the airport in Kabul, after seizing a huge number of vehicles from western forces

Meanwhile at Bagram air base, the former stronghold of western forces, its new Taliban commander was boasting of having ‘beaten’ America using little more than Kalashnikov rifles while saying the airfield will now be ‘a base for jihad for all Muslims’.

Speaking to The Times, 35-year-old Maulawi Hafiz Mohibullah Muktaz said: ‘Never in our wildest dreams could we have believed we could beat a superpower like America with just our Kalashnikovs.

‘When you do jihad all doors open, we defeated America with our faith and our guns and we hope now that Bagram can be a base for jihad for all Muslims

‘For any foreign power considering attacking Afghanistan then look at Bagram now and learn your lesson well before embarking on foolish endeavour. See the West’s mighty technology humbled here by mujahidin.

‘In 15 years as a mujahid fighting the Americans I wondered often if I may fail or die. Yet here is proof of the power of faith and God and jihad. On the back of victory I hope we can use Bagram as a place to spread jihad further into the region and Muslim world.’

Reflecting on America’s withdrawal from the other side of the conflict, General McKenzie said on Monday night: ‘There’s a lot of heartbreak associated with this departure.

‘We did not get everybody out that we wanted to get out. But I think if we’d stayed another 10 days, we wouldn’t have gotten everybody out,’ he insisted.