British holidaymakers will no longer have to quarantine after jetting to mainland Portugal, despite the country remaining on the UK’s amber list.

The Portuguese government announced on Wednesday that it was dropping quarantine requirements for travellers from the UK.

Arrivals will still have to present either a health pass or a negative test for Covid-19, while Brazil has also been added to the list of countries who will not have to quarantine.

The new rules came into effect nearly three weeks after the UK’s decision to kick Portugal off its green list which led to thousands of people cutting short their holidays so they could beat a new quarantine deadline.

Anyone travelling to Portugal from the UK by land, sea or air were told they had to show they had received their second jab at least a fortnight earlier or self-isolate.

An interior ministry statement read: ‘As part of the measures to combat the Covid-19 disease pandemic applied to air traffic, the Government determined that passengers on flights originating in Brazil and the United Kingdom are no longer subject to a period of prophylactic isolation on arrival in Portugal.’

The relaxation in travel rules came as Madeira and the Azores returned to the UK’s green list from August 30, despite mainland Portugal remaining on the amber list. 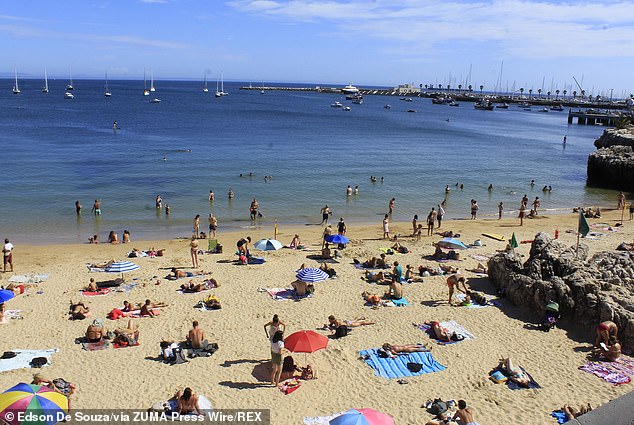 The Portuguese government announced on Wednesday that it was dropping quarantine requirements for travellers from the UK. Pictured: Stock image of the Rainha beach, Cascais

But for non-listed countries, it remains that only trips deemed essential for professional, health or family reasons are allowed into Portugal.

The new rules were expected to remain in place until at least July 11 but have ended up being applied until now.

The change is expected to lead to an increase in the number of British holidaymakers jetting to popular Brit resorts in areas like the Algarve.

All Brits travelling to mainland Portugal, except children under 12, will have to present proof they have received both their jabs or a negative test result for coronavirus to avoid quarantine – 72 hours before arriving for the ‘Gold Standard’ PCR tests and 48 hours for an antigen test.

Airlines have been warned they could face fines of up to £1,700 per passengers for letting holidaymakers board planes without the right certificates.

The new measures came into effect at midnight on Wednesday and will remain in place for at least the next fortnight when the next review is due. 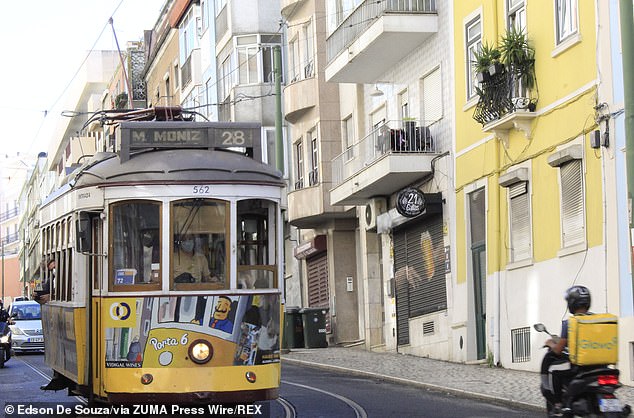 Arrivals will still have to present either a health pass or a negative test for Covid-19, while Brazil has also been added to the list of countries who will not have to quarantine. Pictured: Lisbon

The change in quarantine requirements for UK holidaymakers arriving in Portugal do not appear to have been updated on the UK’s travel guidance page in line with the Portuguese Government’s announcement.

At the start of last month, Portugal lifted quarantine requirements for Brits jabbed with the Indian-made AstraZeneca vaccine.

At the time Portugal, was one of the 13 European countries said to be refusing to recognise the Indian dose of the AstraZeneca vaccine made by the Serum Institute of India and known as Covishield.

But on August 4, it emerged the Portuguese government had changed its mind and would recognise all AstraZeneca doses as well as the Chinese-made vaccine Sinovac.

The U-turn is understood to have occurred after Portuguese president Marcelo Rebelo de Sousa was urged to take action on his visit to Brazil by members of the Portuguese community who will benefit from the decision.

Up to five million Brits were given the Indian-made AstraZeneca vaccine.

On Wednesday, Portugal also confirmed it would allow entry for tourists from Brazil, nearly 18 months after it imposed a ban on non-essential travel from the Portuguese-speaking South American nation to stem the spread of coronavirus.

Although Brazilians, who make up Portugal’s biggest expatriate community, were allowed access for reasons such as work, family or health, the lifting of the tourism ban has been long-awaited.

Portugal is now open to tourists from the European Union who present the bloc’s digital Covid-19 certificate, as well as the United States, from where visitors must show a negative test result on arrival.

Travellers from Brazil now no longer need to quarantine but must provide a negative Covid test. 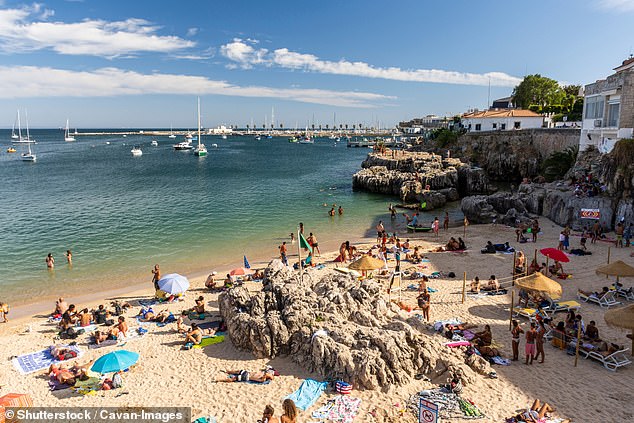 The relaxation in travel rules came as Madeira and the Azores returned to the UK’s green list from August 30, despite mainland Portugal remaining on the amber list. Pictured: Cascais

Brazil has had more than 20.7million confirmed coronavirus infections and more than 580,000 fatalities due to the contagious virus.

Passengers from nations such as Japan, Australia, South Korea, Saudi Arabia, New Zealand, Singapore and Canada will also be able to travel to Portugal if they provide a negative test.

Visitors from Nepal, India and South Africa are still required to quarantine for 14 days upon arrival and must only be travelling for essential reasons.

Portugal has lifted most restrictions with a three-stage plan, supported by a speedy and efficient vaccination rollout.

Portugal has fully vaccinated three-quarters of its population and vaccine programme coordinator Henrique Gouveia e Melo said the figure should rise to 85 percent by the end of September.

With that target due to be reached ahead of schedule, the Government expects to be able to pare back some Covid-related restrictions, such as the number of people allowed into restaurants and other public venues including sports arenas.

It comes after Ryanair’s boss has branded the UK’s traffic light system ‘monstrously stupid’ and called for it to be scrapped so the UK can ‘return to normality’.

Michael O’Leary, 63, suggested replacing the scheme with a ‘simple’ policy that allows unrestricted entry for double-jabbed passengers from Europe.

The Irish businessman said travellers who have received one or neither of the vaccine doses should still have to take a PCR test.

Currently, arrivals in England from low-risk ‘green’ countries and medium-risk ‘amber’ locations must take two Covid tests, even if they are fully vaccinated.

Meanwhile, all travellers coming from red-list destinations must quarantine in a hotel for 10 days and take three tests. 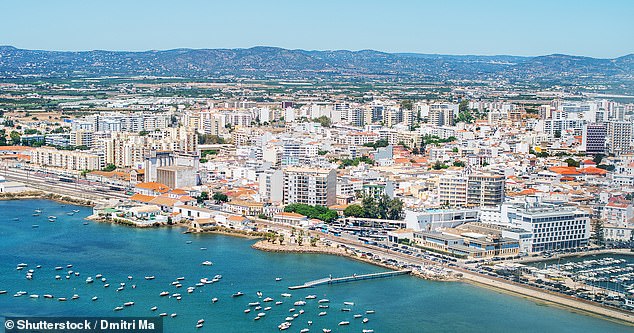 The rules came into effect nearly three weeks after the UK kicked Portugal off its green list which led to thousands of people cutting short their holidays. Pictured: Faro, Algarve

The comments come amid Heathrow Airport’s fourth day of queueing chaos, with passengers facing yet more huge waits at the border.

Mr O’Leary told The Independent: ‘The traffic light system needs to be scrapped.

He added: ‘This monstrously stupid system, that requires passengers from Europe to be double vaccinated and get a PCR test, doesn’t help deal with the Covid problem.’

The Ryanair chief then demanded a ‘return to normality’.

A spokesperson for the Department for Transport (DfT) said: ‘Our top priority is to protect public health – decisions on our traffic light system are kept under regular review and are informed by the latest risk assessment from the Joint Biosecurity Centre and wider public health factors.

‘We recognise the challenging times facing the travel sector, which is why we have committed around £7billion of support by September 2021 and continue to work with industry to help them navigate this difficult period.’

It comes as the airline expects annual passenger numbers to reach ‘close to 100 million’ this year compared with 149 million before the virus crisis, and exceed pre-pandemic levels next summer.