Resettling Afghan refugees in Britain will cost UK taxpayers more than £2.5billion over the next ten years under ‘Operation Warm Welcome’, a report has claimed.

The leaked document suggests the Treasury needs to ‘urgently’ confirm more funding for councils before they can begin making offers to house the refugees.

The UK has already evacuated more than 15,000 people from Afghanistan since August 13, including 8,000 Afghans who had worked with UK armed forces.

Ministers have called on councils to offer support, with more than 100 coming forward to help families find homes and 2,000 places already confirmed.

So far £400million has been put forward to resettle Afghans, but another £557million could be needed over the next three years, according to the report. 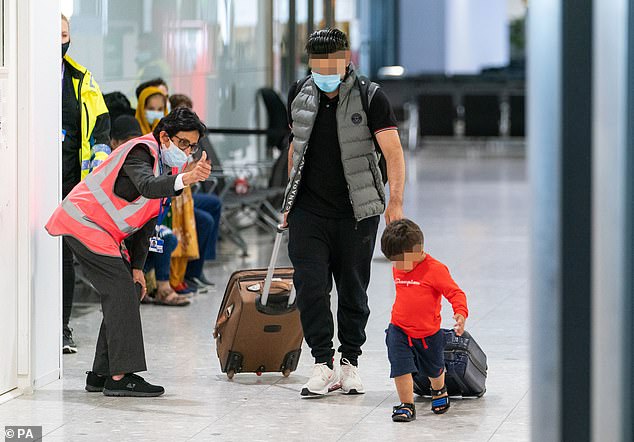 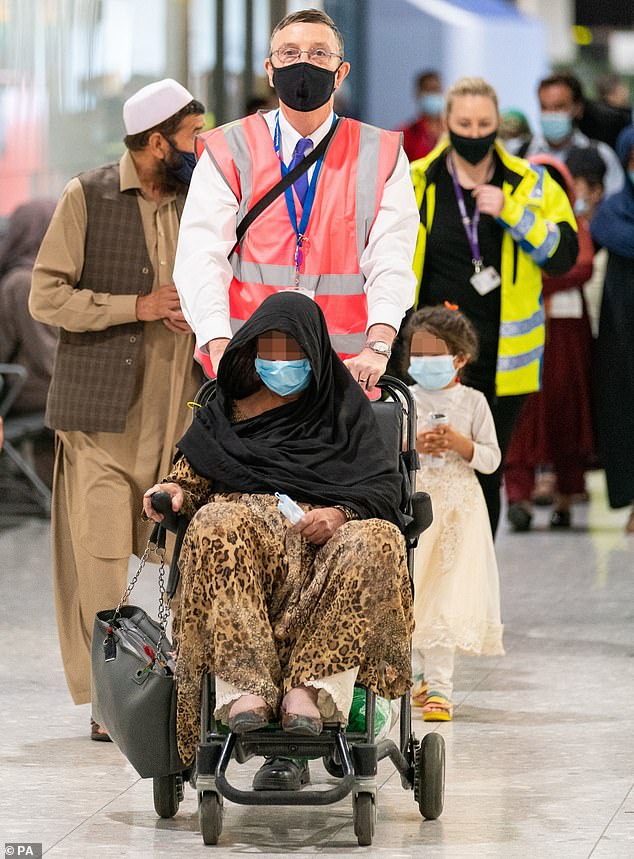 The ‘Afghan Resettlement: Domestic Support Offer and Funding Requirements’ paper was discussed by Ministers on Wednesday and revealed by BBC News today.

One of the two main schemes is the existing Afghan Relocations and Assistance Policy (ARAP) for Afghans who worked with the UK government.

And a new Afghan Citizens Resettlement Scheme (ACRS) was launched last month for Afghan citizens identified as most at risk, such as women and girls.

The current figures are said to be based on 5,000 Afghans arriving under ACRS annually, capped at 20,000 people, at a cost of £715million.

In addition to this there would be 5,000 arriving under the UK Resettlement Scheme each year, costing £1.65billion.

The document said councils should receive £20,520 per person over three years, as well as £3,200 for healthcare funding and further cash for education.

There should also be £15million funding per year to ‘international partners’ to help with resettlement, reported the BBC.

A Ministry for Housing, Community and Local Government spokesman told MailOnline today: ‘Thanks to the efforts of nearly a third of Britain’s councils and vital delivery partners, hundreds of Afghan nationals who have worked alongside our Armed Forces and diplomats in Afghanistan, risking their lives supporting us, have already been warmly welcomed to the country.

‘We are calling on all councils who have not yet come forward with a firm offer of support to help our Afghan friends and their families as they build a new life here in safety.

‘Councils in England, Scotland and Wales will have access to a share of an additional £5million to help them provide the necessary housing and support to Afghans who have worked for this country in Afghanistan, but who now face threats of persecution or worse.’ 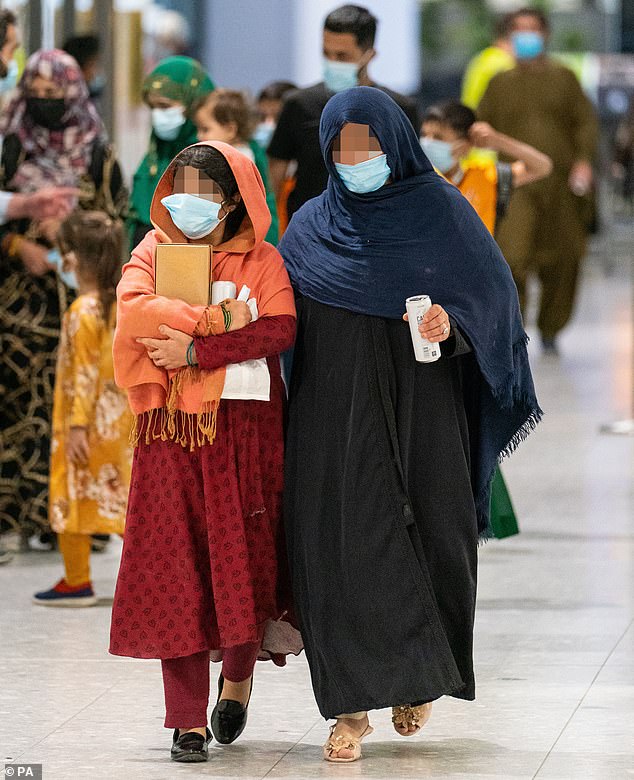 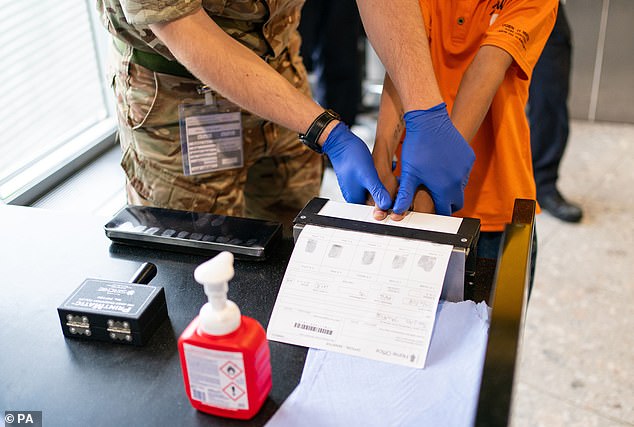 On Wednesday, the Home Office confirmed Afghans who worked with the British government and military will be able to move to the UK permanently.

By numbers: How much resettling the Afghan refugees will cost UK

The department announced the decision as it revealed more details of how its plan, dubbed Operation Warm Welcome, to help Afghans rebuild their lives in the UK would work.

Former Afghan staff and their family members eligible for the Afghan Relocations and Assistance Policy (Arap), which prioritises relocation to the UK for current or former locally employed staff who have been assessed to be under serious threat to life, will be given immediate indefinite leave to remain as opposed to only five years’ temporary residency as previously permitted.

Those who have already been relocated in the UK with temporary residency can now upgrade their immigration status for free, allowing them access to permanent jobs with unrestricted rights to work.

All arrivals are being offered the coronavirus vaccine. So far more than 700 arrivals have left quarantine and received their first dose of the jab.

The Government has also pledged:

Prime Minister Boris Johnson said: ‘We owe an immense debt to those who worked with the Armed Forces in Afghanistan and I am determined that we give them and their families the support they need to rebuild their lives here in the UK. 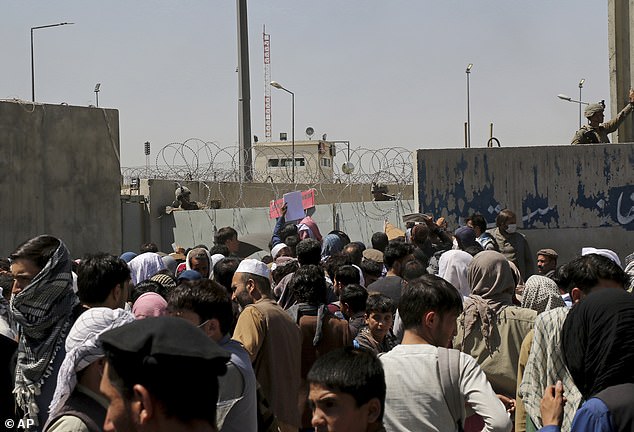 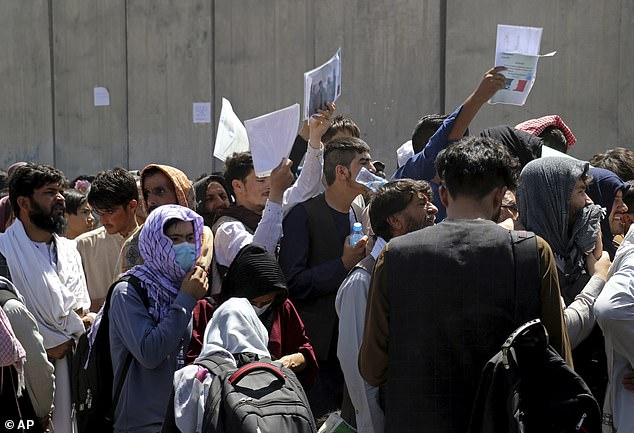 Hundreds of people, some holding documents, gather near an evacuation control checkpoint at Kabul Airport on August 26

‘I know this will be an incredibly daunting time, but I hope they will take heart from the wave of support and generosity already expressed by the British public.’

Shelters and sanitation facilities for those who have fled Afghanistan will be provided as part of a £30million UK aid package.

Foreign Secretary Dominic Raab said the ‘life-saving’ supplies are intended to help those Afghans who have ‘left everything behind’ to reach neighbouring countries.

It is expected that £10million will be made available immediately to humanitarian organisations, such as the United Nations High Commissioner for Refugees (UNHCR), to despatch supplies to the Afghan borders.

Countries predicted to experience a significant increase in refugees will also receive £20million to help with processing new arrivals and to provide essential services and supplies.

Pakistan, Tajikistan, Iran, Uzbekistan and Turkmenistan are among the countries where Afghans are expected to flee in their tens of thousands following the Taliban takeover.

Prime Minister Boris Johnson last month announced an increase in aid to Afghanistan to £286 million, amid a policy to cut spending on overseas assistance.

Victoria Atkins, who has been appointed Afghan Resettlement minister, said: ‘The stability of indefinite leave, the security of access to healthcare and the opportunity of education are the foundation upon which those resettled to the UK can build.’

The Government is still developing the Afghan Citizens Resettlement Scheme, to take in up to 20,000 refugees who were forced to flee their home or face threats of persecution from the Taliban.

As many as 5,000 could arrive in the first year and will also be offered permanent residency. Some £200million has been committed to the scheme so far.

Also this week, the leader of Stoke-on-Trent City Council called for a national debate to address why around two-thirds of local authorities have not stepped up to help Afghan refugees.

Conservative Abi Brown, whose authority recently withdrew from the national asylum dispersal scheme, said Stoke-on-Trent and the wider Staffordshire area are planning to welcome and resettle around 25 families from Afghanistan.

But she questioned why around 66 per cent of other councils have not put themselves forward to help those fleeing the Taliban, despite many having lower numbers of asylum seekers than Stoke-on-Trent.

Ms Brown said: ‘The Government have outlined the Operation Warm Welcome and Stoke-on-Trent, along with our colleagues in Staffordshire, are one of the one in three councils who have said that we will accept Afghan refugee families under that scheme.

‘Our position as a local authority is that we have been part of asylum dispersal for 20 years and we recently withdrew from the scheme.

‘An area like Stoke-on-Trent that has been taking asylum seekers for a very long time – one in 250 of our residents are asylum seekers today – can find, albeit a very small amount, space to take a few more.

‘And yet our colleagues elsewhere in the country, who aren’t part of asylum dispersal… they still say ‘No, sorry, we can’t take anybody’.’