Dominic Raab left it to a junior minister to decide about the rescue of Afghan translators during his holiday.

The Foreign Secretary has defended continuing his stay in Crete as the Taliban advanced by insisting he was ‘working tirelessly’ from his five-star beach resort.

But bombshell new details can be disclosed today of how the Foreign Office minister responsible for the Pacific had to be called in to give orders about the evacuation from Afghanistan. 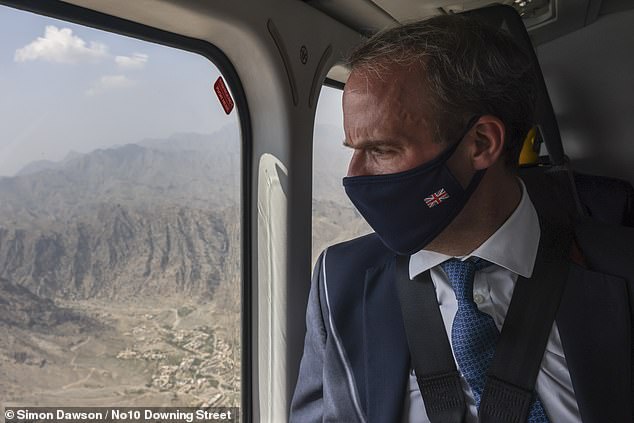 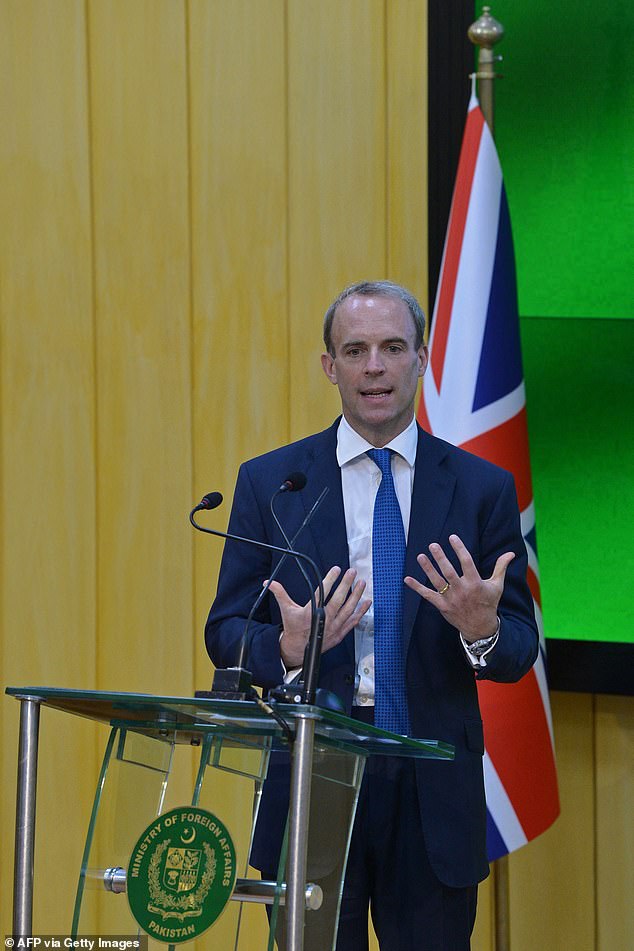 Despite Mr Raab’s claim that he was working while on holiday, the paper was redirected to Lord Goldsmith

As the Taliban closed in on Kabul, officials sought direction from ministers on the scheme to rescue Afghans who worked for the British government.

In a submission on August 13 – two days before the capital fell – diplomats requested clarity on how the rules should be applied in practice to those desperately trying to flee.

Despite Mr Raab’s claim that he was working while on holiday, the paper was redirected to Lord Goldsmith.

The minister, who covers the Pacific and splits his time with the environment department, responded with his instructions on August 14.

The revelation that it was left to Lord Goldsmith to call the shots about the scheme to help Afghan translators will increase pressure on the beleaguered Foreign Secretary and will raise fresh questions about what exactly he did do on the weekend Kabul fell.

The Afghan Relocations and Assistance Policy was established in April to help Afghans whose lives were at risk from the Taliban because they had worked for the British. 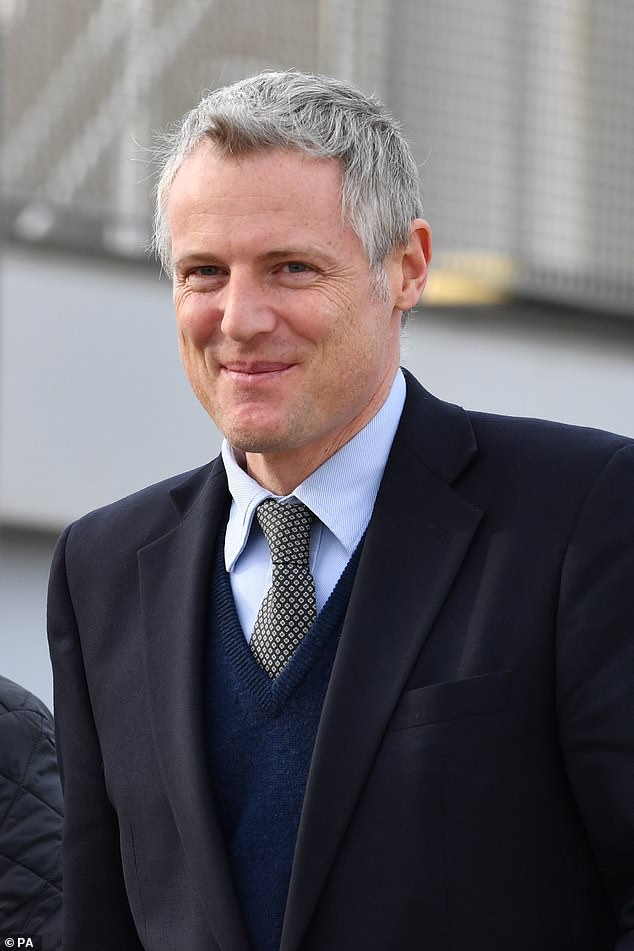 It is understood the submission was made by officials to get ministerial sign-off on the precise details of how the eligibility criteria should be used in light of the rapidly deteriorating situation.

After it was drafted on the evening of August 13, further advice was sought from officials.

The next morning instead of going to Mr Raab to make a decision, it was sent to Lord Goldsmith at around 9am. He responded five hours later.

The Mail last month revealed that while on holiday, Mr Raab had been advised by senior officials to call his Afghan counterpart to seek help airlifting out of the country translators who worked for British troops.

But he failed to do this and the call was delegated to Lord Goldsmith – although it never ended up taking place.

Mr Raab finally flew back after Kabul fell, arriving back in the UK in the early hours of August 16. He has since admitted ‘with hindsight’ he should have come back sooner.

But he has insisted it was ‘nonsense’ that he ‘was lounging on a beach or paddleboarding in the ocean’ on the final day of his holiday.

‘The sea wasn’t open because it was a red flag, so no one was paddleboarding,’ he said.

The Foreign Secretary has insisted he was engaging with international partners in the days leading up to the Taliban’s seizure of Kabul, but the Foreign Office has been unable to provide details of any calls with his international counterparts.

The only public record of a conversation he had with a global partner while on holiday is from after the insurgents had entered the Afghan capital, when he spoke to his opposite number in Pakistan.

The Afghan Relocations and Assistance Policy was established in April to help Afghans whose lives were at risk from the Taliban because they had worked for the British. Pictured, former Afghan interpreter Wazir, 31.

As Mr Raab was grilled by MPs this week, it emerged he went on holiday after his own department warned Afghanistan was on the brink.

A document, obtained by the Commons foreign affairs committee, had told of ‘rapid advances’ by extremists which could lead to ‘the fall of cities, collapse of security forces [and] the Taliban returned to power’.

The Foreign Office assessment was produced on July 22 – more than three weeks before Kabul fell.

Mr Raab, who is now on a diplomatic mission to Pakistan, refused 11 times to say exactly when he had gone on holiday.

A Foreign Office spokesman said last night: ‘This was a straightforward decision which did not require Foreign Secretary approval and was therefore handled in line with the well used system across Whitehall of duty ministers, with a decision taken in under five hours.’

Even the Taliban were ‘taken by surprise’ by the speed of its takeover of Afghanistan, Dominic Raab claimed yesterday.

In comments that contradicted Boris Johnson, the Foreign Secretary insisted there was ‘common widespread surprise’ at the militant group’s pace as it swept through the country and captured Kabul.

But the Prime Minister had said on Thursday that it had been ‘clear for many months’ that the situation could rapidly change.

And Defence Secretary Ben Wallace claimed he argued in July that the ‘game was up’. 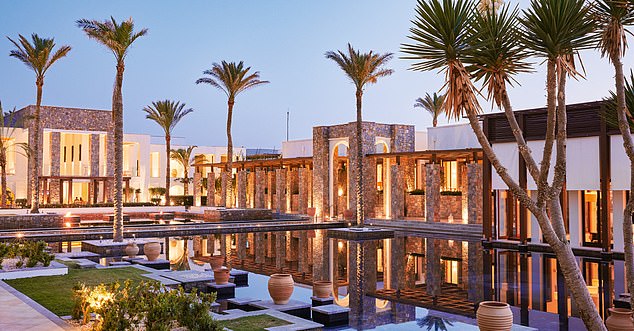 Mr Raab, who is visiting Pakistan on a diplomatic mission to secure safe passage for the stranded Britons and Afghans, said yesterday: ‘The takeover, I think it’s fair to say, was faster than anyone anticipated, not just the United Kingdom or Nato allies.

‘And I suspect the Taliban and ordinary Afghans were taken by surprise.’

The Foreign Secretary has previously said advice from the intelligence community and the military was that the capital was unlikely to fall this year.

He added it would instead see a ‘steady deterioration’ from when foreign troops withdrew at the end of August.

However, Kabul was taken by the Taliban on August 15 while Mr Raab was on holiday at the luxury Amirandes Hotel in Crete and his assertion about the speed of the takeover contradicted the Prime Minister.

Mr Johnson said: ‘I think it’s been clear for many months that the situation could go very fast and that’s been part of the intelligence briefing.

‘There have also been suggestions the Afghan national defence force might hold on for longer. But logically you can see what happened.’