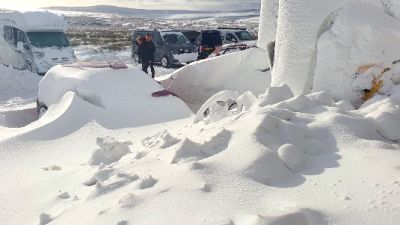 Staff at a pub cut off by snow held a karaoke evening last night as guests were unable to escape for a third night.

On Friday, 61 people became trapped in the Tan Hill Inn in the Yorkshire Dales as a result of heavy snowfall during Storm Arwen, but some claimed they “don’t want to leave” after enjoying the 17th-century hotel’s hospitality.

Now some guests have started leaving after a prolonged stay.

Many have been sleeping on makeshift beds and mattresses on the floor, but they have been treated to films on a projector screen, a quiz night and a buffet meal amongst other comforts.

Oasis tribute band Noasis has been providing musical entertainment as the musicians have been stranded since their gig on Friday at the pub – which at 1,732 feet (528m) above sea level is the highest in the UK.

The pub’s general manager, Nicola Townsend, 51, said “It’s just been lovely and everyone is in really good spirits… it’s a really good atmosphere.

“They’ve formed quite a friendship… like a big family is the best way I can describe it.

“One lady actually said ‘I don’t want to leave’.”

On Saturday evening, guests thanked the seven members of staff stuck inside with them by presenting them with a jar filled with around £300 in cash.

On Sunday, the pub laid on a traditional lunch before guests and staff work together to decorate the bar for Christmas and prepare for an evening of karaoke.

Ms Townsend, from Leyburn, said she feels many of those stranded – including herself – will stay in touch long after they have been freed.

Ms Townsend said they first realised they were trapped after a blizzard on Friday.

“The blizzards were horrendous, how the snow was drifting, it was going all the way up to almost the bedroom windows,” she said.

A tunnel has since been dug out of the front door of the pub, but nearby roads are not yet usable in part due to fallen power cables.

Ms Townsend said mountain rescuers had made it through the snow to attend to one guest who requires medical attention for an ongoing condition.

Forecasters have warned the “coldest night of the season” is set to hit parts of the UK on Sunday evening, with temperatures dropping to as low as minus 10C.