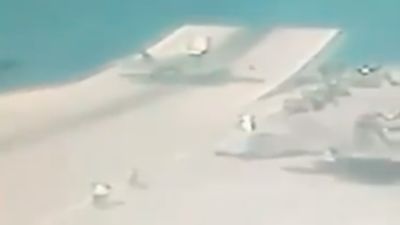 Footage has emerged which appears to show an F35 fighter jet crashing into the sea.

Earlier this month the Ministry of Defence confirmed an F35 had ditched into the Mediterranean.

It was the first time a UK F35 has crashed, but there have been other incidents involving American jets.

A video has been posted on Twitter which appears to show an F35 failing to take off from the aircraft carrier HMS Queen Elizabeth.

The F35 jet can be seen moving too slowly up the short take-off ramp before falling into the sea as the pilot ejects to safety.

The F35 jets are usually based at RAF Marham in Norfolk.

The Ministry of Defence has previously confirmed a crash happened at around 10am UK time on November 17.

The MoD said the pilot had been safely returned to the HMS Queen Elizabeth.

A spokesman added the pilot had been carrying out “routine flying operations” when the ejection happened.

A squadron of F35s, estimated to be worth around £100m each, are on board the £3bn aircraft carrier HMS Queen Elizabeth.

The 65,000-tonne Royal Navy Flagship has been operating in the Mediterranean since it entered active service this year.

It is due to return to the UK soon.